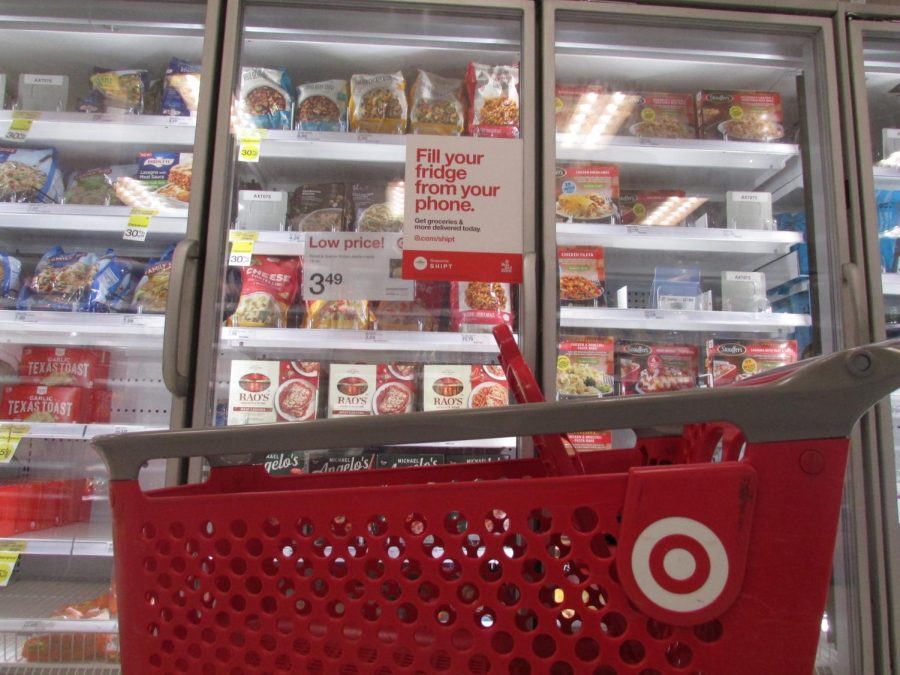 How can I choose between food and toilet paper? Single mom Marcela Rodriguez has been faced with that ongoing question.

“Because I’m a part-time student, I’m working only 20 hours … I’m sacrificing getting a full time job or getting paid higher for my education,” Rodriguez said. “[To pay for food], we have to cut off a bunch of things like going out, activities, or basic things such as detergent, or even toilet paper.”

Since losing her job two years ago due to the pandemic, Rodriguez has enrolled in Skyline College with the hopes of obtaining her degree in Accounting. Once a full-time worker on the cusp of a promotion, Rodriguez now works part-time at Skyline’s SparkPoint food pantry and leverages their services to stay afloat.

Rodriguez is just one of many people who are surrounded by groceries at work, and yet struggling to keep up with the rising cost of food. The United Food and Commercial Workers International Union is a labor union representing 1.3 million workers. In January 2022, they conducted a study revealing that over 75% of workers at Kroger, the largest full service grocery chain in the country, are food insecure.

The U.S. Department of Agriculture (USDA) defines food insecurity as a lack of consistent access to enough food for an active, healthy life. Without SparkPoint, food insecurity would further victimize Rodiguez, her son and other participants.

“[SparkPoint has] been helping me big time because I save money every week as a participant,” Rodriguez said. “So every week, we receive like three or four bags of full groceries such as dry food or produce, fruit and vegetables. They carry items like milk, cheese, chicken, and fish. It’s a big variety. So on average, I personally save an average of $90 per week.”

Jason Matzke is a produce clerk that has been working at Safeway for 22 years and has 9 years left to retire. Inflated prices have significantly decreased his steady access to nutritious food. Before the pandemic, he would reach for a steak and veggie meal for dinner. Just last week, Matzke had to skip two meals due to the cost of food.

“I ended up getting pasta because the carbohydrates will last a couple of days as energy,” said Matzke. “The grocery prices are so high, especially the cost of protein has gone up so much.”

The USDA released findings that the Consumer Price Index (CPI), a measure of economy-wide inflation, increased 9.4 percent between April 2021 and April 2022 for food prices. As a result, people like Matzke and Rodriguez are dramatically shifting their spending habits.

Like Matzke, Rodriguez has sacrificed her sense of normalcy for the sake of saving money. Rodriguez used to supplement food she received from the pantry with food she bought at the store.

“Right now, because the gas prices are pretty expensive, we are just eating what we received from the food pantry, which is chicken,” Rodriguez said. “What we receive is unpredictable. My weekly meal depends on what I received. I mean, it’s not bad. You just need to adjust and adapt to what is served.”

Her family does not eat out much, but when they do, they adhere to a strict budget.

“The last time we went out was for my mother’s birthday,” said Rodriguez. “We went to a buffet in South San Francisco; you pay like $12, and it’s all you can eat. We don’t eat out very often because I’m trying to save money with my son. Every penny that I receive is just just to save up, either to pay rent or just to pay bills and to move forward.”

For Rodriguez, a lack of access to consistent food has been detrimental to maintaining good health.

“Sometimes when we haven’t eaten for a long period of time, like more than six or seven hours, I feel super dizzy,” Rodriguez said. I feel weak the entire day: headache, a lack of concentration, and I cannot focus. You can’t sleep sometimes when you go to bed without a happy belly. I’ve been struggling with that. But thank God we have these services at Skyline College.”

Service is paramount to Matzke’s roommate, Tygarjas Twyrls Bigstyck, a Pacifica City Council person and Mayor Pro Tempore. Bigstyck stepped out of his management position at Safeway when he accepted a role on the council, and he is now a checker. He observes a culture of neglecting nutrition to due cost among his grocery store co-workers.

“I’ve certainly seen a lot of my co-workers for the sake of convenience to go to a McDonald’s or a Subway to just quickly get something low cost to eat even though it’s not very nutritious, and then get back to work,” said Bigstyck.

A solution to food insecurity that arises time and time again is for companies to offer a living wage, the minimum income necessary to meet basic needs, to all workers. However, some companies have resisted cutting into their profit margins for the sake of their employees.

“In general, if we’re paid more, we are able to make better choices in today’s world in which people are becoming more aware of things like organic foods and better quality foods,” Bigstyck said.

Another avenue that grocery retailers could implement to protect workers from food insecurity is company discounts on their products. Matzke described Safeway’s employee benefits: 5% off national brand products and 10% off company products. However, in light of inflated prices, he suggests increasing the discount to 15%.

Matzke and Bigstyck’s roommate once worked at Safeway but has since switched jobs due to personal discrepancies with the company.

“At Taco Bell, he’s really struggling,” Matzke said. “Taco Bell pays $15 an hour, and that’s it. He’s working 30 hours a week, and he’s in a position that he can’t really pick up another job. So, he is trying to get food stamps now.”

Ultimately, for many parts of the Bay Area, food insecurity unfortunately comes with the territory of the astronomical costs of living.

“Ours is a community in which simultaneously has a great deal of money in certain ways and a great deal of poverty and others, given that we’re a community that largely falls below the median income level for half our population,” Bigstyck said. “That’s just the potential for people to be insecure with food.”

Despite challenges in the present, Rodriguez is optimistic that her pursuit of an education at the expense of a more robust paycheck will reap great benefits in the future. Similar to many families, her attitude is one of hope and perseverance.

“I know right now we are struggling financially. But again, this is just temporary. I know I’m gonna get in a better position in the future. I have faith.”