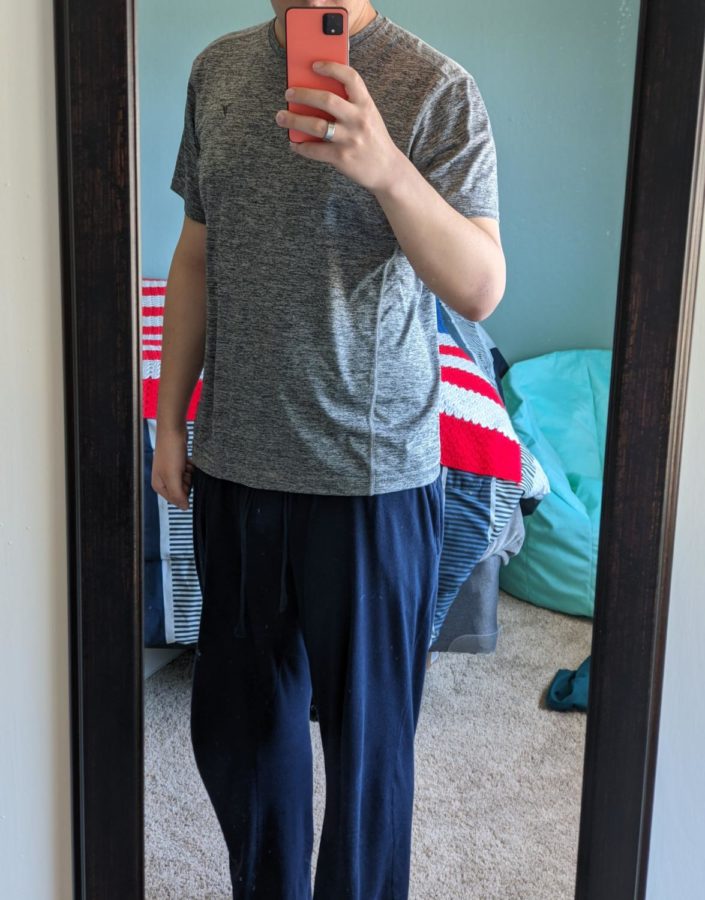 With summer now arriving, we all want to get that body we can to be proud of. We see those people on TV with six-packs, flat stomachs, and just completely toned bodies that make us feel embarrassed when we look at ourselves in the mirror.

That last part described me, back in January. However, my situation was just a bit different.

During Christmas, a month before, one of the things I most wanted was (weirdly), some new slacks. I only had a few pairs, and they were all one color. I got them, but I struggled to fit into them. Then, my mother graciously bought me a couple more pairs. Those didn’t fit either.

Why? Because my belly was prohibiting me from fitting into them. I decided, right then and there, that I was going to start losing weight. I’ll admit, there were times when I was scared, but during the first week of January, I jumped into it headfirst.

I am proud to say, after months of hard work and sweat, I lost over 20 lbs. I started at 227 lbs, and I dropped to around 200 lbs in just about four months. I feel incredible — arguably the best I have ever felt in my entire 21 years of life.

So, how did I do it? It involved a lot of things, including what I ate, how much water I drank, and, of course, working out. In this piece, I will break everything down, and tell you the specifics of what I did, and even what I did incorrectly, in order to help people learn.

Food intake
Let’s start with food. Coming from an Italian family, I was raised to love to eat. So you could imagine the figurative cliff I jumped off of to cut back on what I eat. To start with, I decreased my portions drastically. Instead of a big breakfast, I only ate something medium and a cup of coffee. For lunch, I only ate a bag of chips. Then, for dinner, I ate the most. As I got further into weight loss, I decided to cut back even more on dinner, limiting myself to one portion of everything. In total, I was trying to eat around 800-900 calories a day, 40% less than the recommended 2,000 calorie a day diet.

Then, when the season of Lent came along, I made the drastic decision to completely cut out lunch from my meals for 40 weekdays (or around that — I started late), only eating it during the weekend. I also cut out dessert for five days out of the week, only indulging on Fridays and Saturdays.

Now, let’s discuss cutting out meals. Should I even have been doing this, to begin with? Emily Risk, a registered nurse at Skyline College was asked this in an interview.

“That does work for some people,” she said. “It isn’t appropriate for everybody … and what the term is right now is ‘intermittent fasting’.”

Intermittent fasting is a term that is heard a lot these days. But according to an article from Harvard Health Publishing, the term had gained popularity even earlier.

“(Intermittent fasting) as a weight loss approach has been around in various forms for ages, but was highly popularized in 2012 by BBC broadcast journalist Dr. Michael Mosley’s TV documentary ‘Eat Fast, Live Longer’ and book ‘The Fast Diet’, followed by journalist Kate Harrison’s book ‘The 5:2 Diet’ based on her own experience, and subsequently by Dr. Jason Fung’s 2016 bestseller ‘The Obesity Code’,” it reads.

Risk did say as well that intermittent fasting is “a hot health strategy that is working quite well for some people”, but what IS it? To put it simply, it’s going without a meal for a number of hours, then eating again. Healthline describes a common way, which includes “daily 16-hour fasts or fasting for 24 hours, twice per week.”

“That is an experiment that can be done person-to-person — Try it out, see how you feel,” Risk said. “If you feel like you have low energy, you can’t think properly, and you feel really hungry, it’s not for you.”

“But what about breakfast?”, you might be thinking. Indeed, there’s a stereotype of people rushing out the door without eating breakfast, despite it having been instilled in us at early ages that breakfast is the most important meal of the day.

According to Risk, skipping breakfast is safe to try. So, sure, try skipping a meal, and see how it works. However, something that I have learned is to skip a meal, but be active. It’s easy not to be active, especially now, because almost everyone is working from home, and they may be on Zoom for consecutive hours in meetings every day.

So what do you do to compensate? I replaced my meal with working out (something we will get to later), but others can replace their meal with going for a walk around the block, or walking around the house for an hour or two.

Going back to the topic skipping breakfast, Risk said that if people are doing this particular fasting method, they will still be continuously hydrating, like drinking water or coffee while they are awake, so there is another method.

Drinking Water
The next method I tried was controlling my water intake. You hear it everywhere that water is incredibly important for lots of things. People are taught that they should drink eight glasses of water a day. Other studies all over the web go higher than this, with some saying 13-15 cups of water a day for men and 9-11.5 cups for women. I stuck to the eight glasses but drank in a bigger quantity of glass — eight 16 oz. glasses a day. What I used to do in my early stages was drink about four 16 oz. glasses of water right after my workout, but eventually I changed my routine to one glass of water every half hour or so. But I’ll admit, recently I’ve developed a habit of forgetting to drink my eight glasses or wait longer than the half-hour interval I set for myself, or forget to reset the timer for it altogether.

Luckily, forgetting to drink isn’t the end of the world according to Risk. But how much should you really be drinking a day?

With that said, how do you know if you are drinking enough water in a day? Risk said that one thing to see if you have drunk enough is the color of your urine, which a lot of doctors place emphasis on when it comes to drinking water.

“You want your urine to be clear to light yellow,” she said.

She also mentioned that you should be getting up about every hour to go pee. However, one thing I still need to learn but am learning the hard way is to stop an hour and a half before you go to bed. I have found that drinking water during that time causes me to get up during the night to go to the bathroom, which interrupts sleep, and is overall just uncomfortable trying to sleep with a full bladder. So, please, learn from the mistake that I am making.

Exercising
The final thing that I did during this journey is working out. During this pandemic, lots of people are using workout classes on YouTube, or apps made by gyms people belonged to while they were still open. I have been using an app called “Lose Weight for Men”, from an app developer called Leap Fitness Group. When I first started using it in January, I started at the beginner level for 30 days, then advanced through the levels, but have been repeating the advanced workout level, but increasing the reps.

What it does is take me through a circuit filled with various different exercises, and always ends with a plank and something called a “cobra stretch”, where you place your hands in front of you and lift your torso up like a cobra with your legs behind you. I have increased the plank time to one minute and 40 seconds. In the beginning, you do it once a workout, at the intermediate level, you do it twice, and at the advanced level, you do it three times, so in total, at the advanced level, I do just over four minutes of a plank. In a workout like this, I usually burn around 200 to 600 calories a workout. They last around 20-40 minutes each.

So, should you stick to the same pattern I adhere to? I asked Risk, and she said yes, but with a caveat.

“Anything that you can do to make it a habit will help your cause tremendously,” she said.

Making it a habit is very important when it comes to things like this, because if you don’t make it a habit, you will more than likely not stick to your plans and not see the results that you want. The way I got to where I wanted to be was doing my workout routine six days a week, but making it a habit does not necessarily mean that you need to do it that often. If you do it every other day and let your body rest for one day, great. Just as long as you make it a habit to be doing things on some sort of regular basis.

“How about the point of using an app for exercise?”, you might be asking yourself. It is still a valid point, even though vaccines will start being distributed more frequently, which means gyms and fitness centers will be opening back up. However, some people, including me, are bound to find it hard to return to that public setting, as they have become so accustomed to doing on apps or over YouTube. So, will those still be viable options once gyms and fitness centers do start opening up?

“I think we miss being around other people,” Risk said. “Introverts, I think, will probably really appreciate (remote options), but I think for extraverts and people who enjoy being in the gym and missed the gym, or are exercising with actual humans next to them, will go back to that in a hurry, as soon as they can.”

So, if you do want to go back to the gym, you can, but if you feel more comfortable at home, not surrounded by other people, that’s great too, because as long as that habit is there, it’s good.

So, all this has summarized what I did to start losing weight. Another other notable thing that Risk said that’s also worth mentioning is to manage your sleep, and make sure that you are getting your eight hours. Other than that, drink some water, eat right, exercise, and make those things into habits. You’ll soon see great results too.