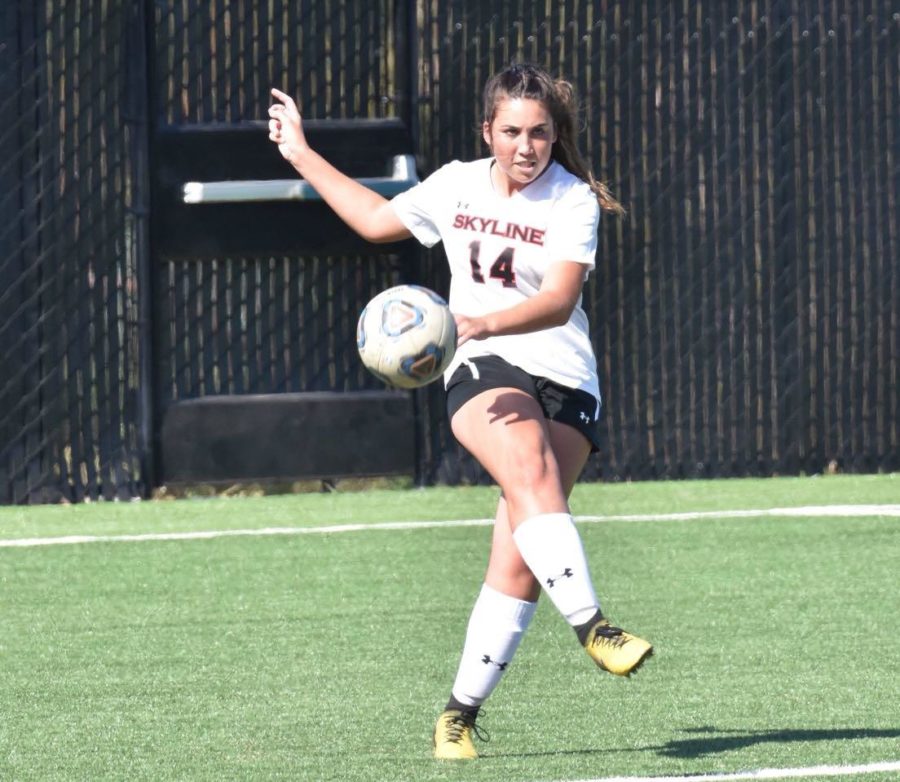 Mental health has been an important topic that has begun to get recognized much more in our world. More and more professional athletes have been coming out and talking about their struggles with mental health. The likes of Kevin Love, Michael Phelps, Abby Wambach, Joey Votto, and many other stars have described their experiences.

David Avak from Aragon High School is a second-year guard for the Skyline men’s basketball team, who was a very solid player for Head Coach Justin Piergrossi’s Trojans in his first year at Skyline, and was primed for a breakout second year.

Being stuck in the house has been very difficult for everybody, and for Avak, it was refreshing to be able to play basketball outside after having not been able to play with his teammates for several months during the early stages of lockdown. Several factors helped Avak to stay on the right track.

“I still love the game no matter what the conditions stand, being able to get into the gym for the past couple of months was nice and before that we were playing outside,” Avak said. “The hope of having a season was mostly what kept me going.”

Many people, including Avak, believed that the world would be back to normal after a couple weeks, when the lockdown was first announced. At the time, he was not too stressed about the conditions that the situation imposed. The beginning of the summer in 2020 was when he began to ask questions about the future.

“At first, it did not really affect me that much, because I did not expect this to be long-term — I thought that after a couple weeks or a couple of months, it would be over,” Avak said. “I started to get more stressed out about it during the summer, and this seemed like it was going to take forever.”

Having a supportive team around you is key to building better mental stability. Family, teammates, and coaching staff have been a big help for Avak, and they have been there for him when need be.

“Mostly my family has helped me through these times, but I have been talking to several of my teammates,” Avak said. “(Piergrossi) has helped me a lot as well.”

Falling out of a routine is not ideal, and the focus was not always there for Avak. He explained how staying stuck at home was not always the best option for himself. Avak emphasized how he was not taking care of himself physically or mentally as much as he used to for a period of time.

“Somewhere around December, I just started thinking way more deeply than I usually do,” Avak said. “It just started happening, and it might have been because of all the time I had at home and not being able to go out. I started getting bored, and started thinking about certain things, and that was what kind of got to me. I usually meditate, and I was not meditating.”

There are many different ways you can try to strengthen your mental health and well-being. It is not easy to find yourself, and for Avak, he found several ways to help increase his mental resilience.

“I needed to answer some questions — more of a philosophical thing,” Avak said. “I had to go read some stuff online, and some books, and also try to occupy myself with at least something I used to do. Talking to my family about certain things and meditating helped.”

The whole process was very tiring, and Avak felt mentally drained. Sometimes overthinking was a big factor in what was determining his emotions.

“I had constant anxiety over really rational things and thoughts, those were not good but it all stemmed through uncertainty,” Avak said, “I had uncertainty about everything, the health of the country, the world, your family and then you become more uncertain about everything going on.”

A year with many unpredictable consequences taught everyone lessons, and Avak was no exception.

“I got a lot out of the past year, and have become more resilient,” he said.

Avak, already having a year under his belt before lockdown, was a nice sight to see, but for outfielder Stephen Blecha, his first year as a Trojan proved to be very unfamiliar territory, considering it coincided with the pandemic.

The struggles of not being able to play affected Blecha’s way of getting his mind off school for a while by just throwing the ball around.

“It was rough not playing, because when the season shut down, baseball was my release of stress from the world, being able to play for three hours and have no worries other than baseball,” he said.

Without having sports to rely on, it was tough for Blecha to have a clear mind with all these due dates for assignments constantly on his mind.

“Just school and no sports was iffy — that little bit of added stress — and now you do not get the satisfaction of passing your classes so you can keep playing — You were just passing classes, so that eventually, hopefully, it will be back to playing,” Blecha said.

Without a clear future to be looking forward to during the lockdown, Blecha felt he had reached a mental breaking point. He was frustrated to the point of asking himself why he was doing any of it at all if there was going to be no real reward.

Something that helped get Blecha back on track was the baseball team trying to get back into the swing of things and coming back to workouts in a safe and organized manner.

“We got an email saying we would possibly get back into the season, they sent us workouts to do just at home to try and get our bodies back into the grind of working out every day,” Blecha said.

He realized that he had to go back to what he loves and go get some fresh air. This was a big turning point for him, as he got to clear his mind.

“Having a younger brother so close to my age, eventually we got to a point where we could not do anything for our own schools,” Blecha said. “It was just the two of us, and we would go out to the local park and either play catch or hit for a little bit to let off some steam.”

Blecha’s mental health was not always the best, as his family members contracted COVID-19, and at that moment he was not feeling like his normal self. Luckily, all of those family members are now safe, and Blecha was able to get through those dark tough times.

“There is that little moment in your head of the situation not ending well, but thankfully they all recovered with no lingering effects,” Blecha said.

A piece of advice Blecha said he would give to himself was to keep safe and to follow all the guidelines and stick with what you have and eventually you will end up where you are supposed to be.

However, male athletes have not been the only ones coping with the uncertainty of the pandemic, as Skyline’s female athletes too have dealt with their fair share of trials and tribulations amidst the pandemic.

Keely Anderberg, midfielder for Skyline’s women’s soccer team, had expected the initial stay-at-home order to be temporary. Unfortunately, Anderberg and the countless others who had hoped the same quickly found themselves stuck at home for much longer than they originally anticipated.

“We went from my freshman year playing all the time and working out to be cut off completely,” said soccer player Keely Anderberg, “When we were told we weren’t able to play for two weeks I figured it would be a nice break, but once they said we aren’t going back that first month was really rough, I had never worried about not being able to play before.”

For athletes such as Keely, sports aren’t simply an extracurricular activity but a way of life, as sports often provide athletes with the experiences necessary to build the time management and communication skills that allow them to excel both on and off the field. For Anderberg, soccer played a major role in not only helping her build a strong academic standing but improve her mental health as well — skills she struggled to maintain amidst the pandemic.

“I felt frustrated and helpless in a way — For me I do best academically when I’m playing sports because it’s an outlet for me, so it was really difficult to keep up with my academics,” said Anderberg. “If I allowed myself to think about it too much, I would get depressed.”

Women’s basketball forward Emilia Dougherty had a similar experience to Anderberg when it came to the pandemic derailing her athletic career, as she too found it hard to cope with the initial uncertainty brought on by COVID-19.

“It was detrimental,” Dougherty said. “It was hard, because I play basketball every single day; it’s part of my daily routine. I go to practice, I lift, I work out. It was weird having that dead period, not being able to go to Skyline, not being able to get my game better. It was really hard.”

As if not being able to play the sport you love wasn’t disparaging enough, athletes were also stripped of the opportunities to play alongside their friends, build team chemistry, and create the bonds that allow teams to find success on and off the court.

“It honestly made me sad,” Dougherty said. “It’s a community thing too — I miss seeing my friends everyday. I honestly just miss school in general, disregarding basketball, it’s good to have community. When you’re just isolated at home, it’s just sad. Even when we have classes on screen, it’s not the same. You have these awkward moments, and you miss out on that personal feeling. It was just difficult the whole fall.”

Despite the challenges brought about by cancelled seasons and at-home learning, most athletes figure out what to do when it comes to overcoming obstacles, and a global pandemic is no exception.

Anderberg says she has developed a greater appreciation for the opportunities that soccer provided her, especially when it comes to the community and bonds she was able to create on the field. As for Dougherty, she didn’t let pandemic hold her back from continuing to hone her craft.

“I think the pandemic made me more competitive,” said Dougherty, “I’ve gained a lot of confidence. I started working out a lot, lifting, getting stronger, and playing basketball outside whenever I could. In a way, the pandemic has given me the drive to play at the next level.”

While the pandemic initially put Skyline’s athletes in an unfamiliar position, they as a whole have shown the resilience and personal growth that encompass the true power that juco sports have to offer. With a reinforced passion for their sport, Trojans across campus look forward to a return to normalcy.

“I’m just trying to live each day to the fullest, now that I see how fast everything I took for granted can be taken away, and especially now that everything’s opening up, I’m trying to enjoy it as much as I can,” Anderberg said. “I’m a lot more thankful for the small things.”