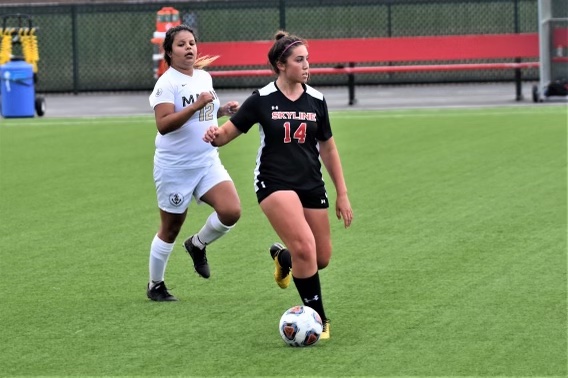 It was a very big ask for these student-athletes as they needed to get weekly coronavirus tests and also required them to test negative 48 hours before a game. Skyline did not have a testing zone on campus. Kevin Corsiglia, head coach of Skyline women’s soccer, described the struggles the players had to deal with.

“Taking everything into account, they settled into this routine of not coming to school, and their lives changed outside of school,” Corsiglia said. “When we were face-to-face it was going to class, get ready for practice, have practice, go home, and go to work. They are working at different times and could not come to practice because they were having to work and help out families and also some people were just weren’t safe with coming back yet.”

These factors ultimately led to the team opting out of the Spring 1 session, which was scheduled to take place between Jan 19 and April 17. Only three schools out of the 12 in the conference on the women’s side opted into the Spring 1 block.

Corsiglia described the need to try to get back a sense of normality, but also expressed his recognition of how important competition is for these athletes, as well as how proud he is of the athletic department’s efforts.

“Trying to get our students back on campus creates a roadmap for everybody: how do we get everybody off these Zoom calls and back to face to face?” Corsiglia said. “If we can start providing that roadmap and how it can be done safely, then I think it will benefit the college as a whole. I do not only want to be back on the field with my players but also in the classroom with my students.”

Staying at home and not being able to compete at the highest level has been tough for these athletes. Mental health is a very serious thing and is something that many people struggle with. Skyline soccer player Isabel Martin explained ways she was able to strengthen her mental toughness without having the season.

“Taking a break, especially stepping away from the screen, has helped, just going for a walk, or taking a walk with my dog or walking on the treadmill,” Martin said, “Stepping away has really helped me.”

It seems that the players will have a more successful fall, with several scrimmages set to hopefully occur. Martin emphasized the bond she wants to create when the full team gets back out there and catch up on missed time with them.

“One thing I always look forward to is team bonding and building better connections because your teammates are your friends,” Martin said.

Not being able to have a season was a big downside for the players. After training and conditioning in the summer every day, second-year Skyline soccer player Keely Anderberg described how tough it was to learn they would not have a season.

“It made doing school a lot harder, to be honest because you do not have that one stress outlet you can go to,” Anderberg said. “We prepared the entire summer and practiced every day — We looked like we were in good condition. Being told we were not having a season was awful.”

There were many adjustments to be made throughout the entirety of the fall semester. Without having a season, the players found themselves with a lot of time on their hands.

“I played pickup games with my closest friends, so we have been doing that this whole time,” Anderberg said. “For the most part, I was probably able to play soccer more than most people were, but it’s not the same feeling.”

The incoming freshmen are arriving in a very hard situation. Their first time talking to their new teammates was over a Zoom call.

The team used to do online training sessions, but those, of course, did not seem to be as effective as the in-person practices.

“It was hard because the first time we met them was over Zoom and the first freshman I met was in one of my classes,” Anderberg said. “They have missed out on their entire freshman year of college — They missed out on the trips and all the team bonding. I know what it was supposed to feel like for them. I just met them because we just started training.”

Anderberg remarked that you have to make time for the things you love to do.

“Write a list or else everything will fall apart if you are not on top of everything, your teachers are not there telling you what to do anymore,” she said.

It has been a difficult time for everyone, but the future seems to be looking brighter for the Skyline women’s soccer team, with the fall set to have more in store for them.