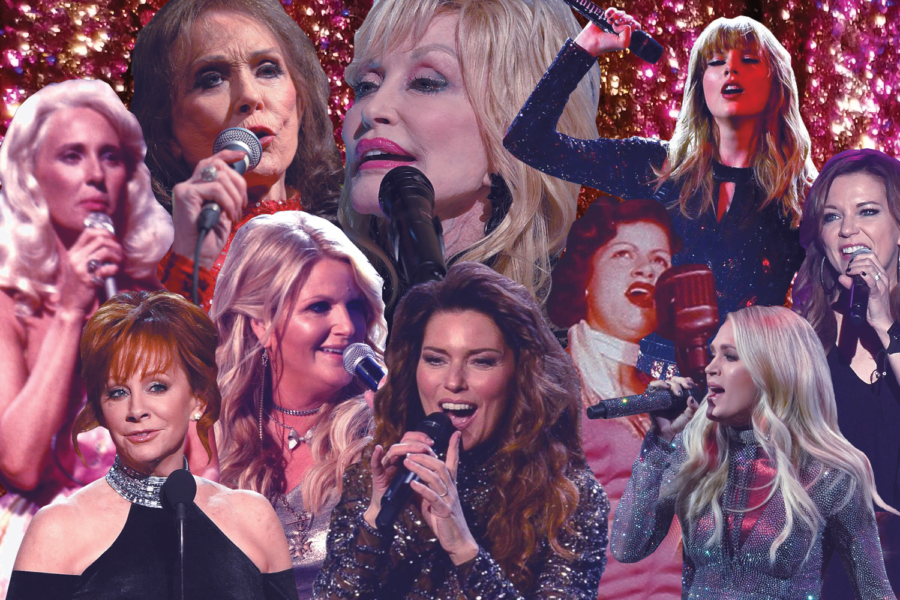 A compilation of the women who have graced Country Radio through the years.

This month is International Women’s Month, a month celebrating women and their achievements. Coincidentally, my favorite style of music is country, so I couldn’t think of a better way to combine those two worlds and compile a list of the 10 most iconic women in country music. This was a tough list to compile, as there were so many to choose from.

10. Shania Twain
Starting off this list is an artist who broke into the world of country music in the early 90s, marking herself as a staple of country music. According to Grove Music Online, a service from Oxford Music Online, Twain has won a Grammy award for Best Country Album and an American Music Award for Best New Artist. She was also called the best-selling female artist in country history, with the article citing two examples: “The Woman in Me”, produced in 1995, selling 12 million copies; and “Up!”, produced in 2004, selling over 11 million copies. Two songs that she’s particularly known for are “Man, I Feel Like a Woman” and “Still The One”.

9. Carrie Underwood
Underwood was the winner of the fourth season of “American Idol”, and after, like Twain, took the country world by storm. You may know her for her song, “Before He Cheats”, but after her “Idol” win, debuted with her album “Some Hearts”, which, according to Forbes, is the best-selling solo country album of the past decade, with over 7.4 million copies sold. Forbes also lists some achievements that she’s experienced throughout her career, which include 58 million records sold worldwide, 21 #1 singles, seven Grammys, 38 weeks on Billboard’s top albums chart, and 1.5 million streams of her music worldwide.

8. Reba McEntire
Dubbed “The Queen of Country” in an archived Entertainment Weekly article from 2007, McEntire has made a name for herself in music and in acting. In music, according to an article from The Herald Bulletin, she has “released 29 studio albums and acquired 42 #1 singles. She has sold more than 75 million records worldwide.” In her acting career, she starred in a sitcom produced by her, called “Reba”, which aired on the WB Network (now The CW) from 2001-2007, with over 125 episodes that make up six seasons. She also recorded a version of her hit, “I’m a Survivor”, to be the theme song to the sitcom. You can still watch the series, as it is in syndication, airing occasionally on CMT and FreeForm.

7. Martina McBride
McBride was #1 on a list Rolling Stone compiled of 25 artists who have never won a Grammy, having been nominated 14 times. However, that doesn’t define her career. McBride has many albums and singles in her career that have gotten RIAA, or Recording Industry Association of America, certifications of either gold or platinum from 1995-2018. However, her achievements go beyond music, as she is a contributor to charities Loveisrespect and National Teen Dating Abuse Helpline with her program “My Time to Shine”, promoting healthy relationships.

6. Patsy Cline
Now, we’re getting into some old country. Cline is one of the legends in country music, but she crossed over into pop later in her career. According to the Encyclopedia Britannica Website, she became a regular performer on the Grand Old Opry, which “largely defined the country music genre.” Her most popular song, “I Fall to Pieces’”, was popular for 39 weeks straight. Although she died at age 31, after a plane crash in March 1963, her music has lived on for generations.

5. Trisha Yearwood
Yearwood, according to an article from The Tennessean, has sold 15 million albums and has 19 singles that have ranked in the top 10. Most of her albums have gone gold or platinum, like McBride. She is more known, however, for her cooking, as she hosted a show on the Food Network called “Trisha’s Southern Cooking”, using the instrumentals from her hit “XXX’s and OOO’s (An American Girl)” as the theme. She is also known for her songs “How Do I Live”, and her debut hit, “She’s In Love With the Boy”.

4. Taylor Swift
While Swift has mostly made her name in pop music more recently, her start came in the world of country music. Some of her most popular country hits include “Love Story”, “Teardrops On My Guitar”, and “Our Song”. Her album “Fearless”, according to RIAA, reached Diamond certification in 2017, with over 10 million sales worldwide. She is also a multiple-time award winner in the country sector, winning New Female Vocalist in 2007, and Album of the Year in 2008 for “Fearless”, among countless others at the American Country Music Awards and the Country Music Association Awards.

3. Tammy Wynette
Wynette was dubbed a queen of Country Music in a 1998 New York Times article about her death. Her most popular hit, “Stand By Your Man”, reached number one on the Billboard country singles list, and was part of three that reached number one, including “Take Me to Your World” and “D-I-V-O-R-C-E”. Wynette was the first female country singer to reach a million albums sold. She also recorded 50 albums and sold 30 million recordings.

2. Loretta Lynn
Lynn is another legend in Country Music. Her Billboard page tells the entire story of why. She has 16 #1 hits and 56 in the top 10. She has won three Grammy awards: one for best performance in “After The Fire is Gone”, and two in 2004 for vocal collaboration in the song “Portland Oregon”, and best album for “Van Lear Rose”. It was announced also at the beginning of the year according to Pitchfork, that she will be releasing another album, her 50th album. It will be called “Still Woman Enough” and will be dropping March 19.

Dolly Parton
Come on now, did you think I wasn’t going to put her at #1? Parton is arguably the most popular woman in country music history. Her most popular hits include “I Will Always Love You” (notably covered by another legendary woman in music, Whitney Houston), “Jolene”, “Here You Come Again”, and “9 to 5”. She also starred in a movie with comedy legend Lily Tomlin, which shares the name of the last hit mentioned. She continues to be a household name when it comes to women in country music.

And that concludes the 10 most influential women in the history of country music. Many are inspired by their careers. On International Women’s Month, l highly suggest you listen to at least one song from every artist on this list.