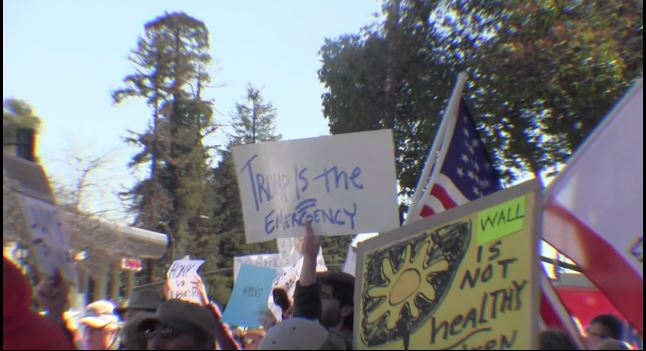 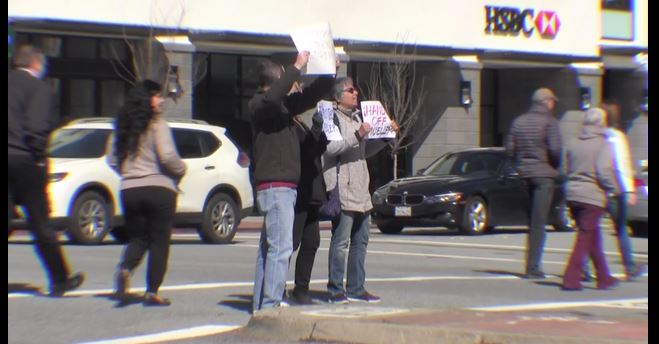 People gathered in front of the Bank Of America Financial Center in San Mateo on Feb. 18, Presidents Day, to protest against President Trump’s national emergency call for the new border wall. The protest was held by the progressive policy organizations MoveOn and supported by Indivisible. The protest in San Mateo was not the only one taking place. There were also several protests in Oakland and in downtown San Francisco being held on the same day.

MoveOn has been a platform for organized protests for 20 years and first started when tech entrepreneurs, Joan Blades and Wes Boyd created an online petition about the Clinton impeachment in 1998. Since then, their member count has increased and residents around the U.S. have been using the Move On website to start petitions, campaigns, or help donate to a specific cause.

MoveOn was one among several organizations present at the protest. There was also Indivisible, a group that helps fund and support civic education and leadership development by offering training, facilitating regional group coordination, building partnerships, helping other citizens learn and understand federal and state policy processes, and supporting voter registration.

The protest in San Mateo consisted of 150 people lined up toward the busy street holding large signs and chanting phrases such as, “What is democracy? We are democracy!” as drivers honked in support or rolled down their windows and cheered.

Glenn Ricafrente, a member of Indivisible states, “In the past we’ve posted these rallies on behalf of MoveOn, which is organizing these all over the country, so we are doing it locally.”

Ricafrente refers to the amount of awareness that reaches these protests and that by posting the information on a more local website, people in the area will be more likely to see it and want to participate.

Debra Kattler, another member of Indivisible, also indicates, “For me the idea of Trump declaring an emergency and severting[sic] the will of the people and what Congress has decided, is just wrong and a threat to our democracy.”

A San Mateo resident, Lynette Garcia, stepped in to get more people participating in speaking up and getting involved by picking up a megaphone and leading the democratic chants. Garcia explains, “Trump was elected and he has lied pretty much throughout his whole time through his administration, and I think that funds could be better spent some place else.”

Business Insider infers that the median price for a home in California in 2018 was over $600,000 and five counties in the Bay Area reported a median home price over $1 million. The cost of living is over 43 percent higher than the national average which most cannot afford as the national average salary is $77,324 for those with advanced college degrees, according to Balanced Careers.

The protest was held for an hour and more people continued to protest after the time limit. MoveOn later posted to their website photos from each of the 277 events held throughout the United States. MoveOn had several allies in their protests such as United We Dream, Indivisible, Poeple For the American Way, and 100 more organizations.