Tipline moved to the front page of Skyline’s website 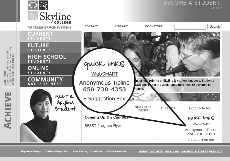 Now that the tipline is more prominent, students may begin to utilize it more often. ()

Skyline’s anonymous tipline, which has existed for several years now, was recently moved to the front page of the school website.

Calls to the tipline go to a voice messaging system, which can then be accessed by several prominent members of the district’s security division as a source of information about what may be happening here on campus.

According to Skyline’s Chief of Public Safety Brian Tupper, the anonymous nature of the tipline means that claims made against specific individuals have to be taken at face value.”We take [the information] for what it is and investigate it as far as parameters allow [us] to,” Tupper said. “Someone is not guilty of a situation just because an anonymous person said so.”

Tupper said that the information is still utilized by the Public Safety department however it can be. For example, a single anonymous tip about an individual crime may not carry much weight on its own but if that information coincides with tips or information from other credible sources, it becomes much more valuable.

“Each call is going to be looked at as far as its basis,” Tupper said. “We assess it once we get it and then we move on from there.”

The tipline came into being several years ago when Skyline’s Chief of Public Safety was Mike Celeste, who is now the Director of Public Safety for the entire district.”The anonymous tipline is a project I put together while working at Skyline,” Celeste said.

According to Celeste, the tipline started out as a simple voice mailbox which anyone who knew the number could call and leave information either anonymously or including contact information in the message.

However, he said the original tipline was not well publicized and in the entirety of the time he worked at Skyline, it received only a handful of phone calls.

After the shooting incident, the Public Safety Department was looking for additional steps they could take to increase security, although Celeste stressed that there was no single event that triggered the change.

“We were looking for more security measures we could take and I mentioned that we already have a tipline,” Celeste said.Celeste thinks that moving the tipline to the front page will make it a more prominent and useful tool, and there is already planning to implement similar systems at Canada and CSM.

In addition to being a simple tool to report active crimes, Tupper believes the tipline will be used not only to report crimes that are actually happening, but as an outlet for people to report security concerns they may have. “By its very nature, it will be utilized in a different way because it’s open and anyone can access it anonymously,” Tupper said.

Tupper thinks this can potentially be even more useful than the tipline’s original purpose. According to Tupper, while information from this source may not be extremely valuable in stopping the crime from happening during the fact, it can alert the Public Safety Office to areas that they might want to be more aware of.

“[Knowing where to be] is where the deterrents and prevention comes in, which lends [to] that atmosphere of safety,” Tupper said.

Tupper is also hoping to be able to use this resource to really crack down on crimes that seem insignificant, like graffiti on bathroom walls, but end up costing the school much more than people think.

If a student decides to write on the walls, they then need to be painted over. The money for that comes out of a budget, and that budget might charge another budget for the money, and so on. This ultimately takes financial resources away from the school during a time when the school needs every bit of money it can get.

Tupper hopes that he can use the tipline to be able to prevent this, especially if people are able to use it to report these “crimes of opportunity” that they may not have mentioned otherwise.

“Sometimes, it’s just our presence that makes the difference,” Tupper said. “We might not be able to necessarily catch the crime in the act, but our job is also preventative. We want to deter the crime from happening at all.”

The tipline has yet to see an increase in use, but Tupper takes this as a sign to remain optimistic.

“I don’t think people come to this campus to steal,” Tupper said. “99.9 percent of the people come here for an education, and it’s that 0.1 percent that look at and carry out these crimes of opportunity. Having a presence here puts a damper on those ‘little’ crimes that ruin schools.”