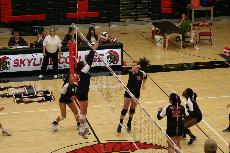 Skyline's player attempts to slam a spike past a Gavilan defender ()

Despite the early leads Skyline seized against Gavilan during their Oct. 2 volleyball match, the Rams still managed to pull ahead to a 3-0 victory.

The Lady Trojans performed well in the early portion of the match’s first game, scoring several points before Gavilan was able to land even one kill.

However, once Gavilan got going, the Lady Trojans began to fall behind and were largely unable to regain the lead.

Skyline’s team employed excellent tactics and plays during the game and their use of teamwork was very evident in the way they collaborated to intercept balls, return volleys and set up intimidating spikes.

However, as the game progressed and Gavilan’s lead grew, it became apparent that despite their extraordinary talent, Skyline was losing steam.

The teams switched sides for the second set and Skyline managed to take another early lead.

Unfortunately, history repeated itself and Gavilan began a scoring streak again, quickly seizing the lead from Skyline and running with it. Skyline slipped even farther behind in the second set. They did not allow themselves to be shut out entirely, but they were never able to regain the lead from Gavilan.

The Rams won the second game 25-15, the team switches sides again and the third set began.

This time, Skyline’s early lead consisted of only a single point before Gavilan began a scoring run.

There was a moment late in the last game where it looked like Skyline might turn the game around. Gavilan was only one kill away from winning the set as they were at 24 (game point) to Skyline’s 15.

The Skyline team rallied and managed to prevent Gavilan from scoring any points for the next six volleys, bringing the score to 24-21. Gavilan was still in the lead but it seemed as if Skyline might be able to turn the set around and get back in the game.

However, they were unable to prevent Gavilan from scoring that final point and Gavilan won the third set 25-21, securing the match in three sets out of the possible five they could have played.

“We’re still learning,” Salahuddin said. “We have a lot of potential, but you have to go through these growing pains to learn.”

Salahuddin is looking forward to being able to shape the team into a real competing force. She thinks the team is already doing very well, and she is identifying problem areas and working on them.

Though Salahuddin was disappointed by the defeat, she identified parts of the game that she felt went particularly well, including Skyline’s six-point streak late in the third set.

“You could see we had a lot of gorgeous moments,” Salahuddin said. “We’re working on stringing them together and we’ve definitely improved.”