The Skyline View • May 5, 2009 • https://www.theskylineview.com/uncategorized/2009/05/05/the-rocky-horror-picture-show-graces-skylines-theaterbr/ 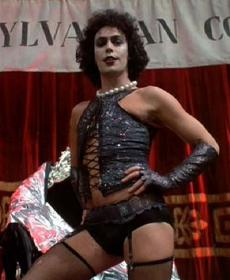 On Saturday, May 2, at the stroke of midnight, Skyline College’s own Drama Club dimmed the lights and fired up the big screen for a showing of “The Rocky Horror Picture Show.”

They clearly knew what they were doing when they selected the movie, and they knew how to live up to the expectations people would show up with.

They had greeters at each door dressed in drag and outrageous costumes, testing people as they entered with questions about the movie to see if they were “virgins”.

Once the show started, it was done in true form – “gift baskets”, sold before the show, were stuffed with rice, squirt guns, confetti, toast, playing cards, party hats, and more.

I had the particular amusement of sitting in front of a group of people who had never seen the picture before, and had no idea how to watch it.

“The Rocky Horror Picture Show” is intended to be a parody on science fiction and horror films. It is narrated by a criminologist. He tells the story of Brad and Janet, who get a flat tire on a rainy night and go to a house they see on the road to use the phone. Instead, they find a bizarre convention going on, hosted by Dr. Frank N. Furter, a self-proclaimed “sweet transvestite from transsexual Transylvania.” Furter takes Brad and Janet to witness his creation of Rocky Horror, in a clear mockery of Frankenstein lab scenes. He gives life to Rocky Horror, at which point a man in a denim jacket rides out of a deep freeze on a motorcycle and starts singing. It gets crazier from there, with a tangled web of seduction and something like a love octagon involving everyone in the mansion. It’s terrible, it’s a classic, and audiences love it.

And so, throughout the show, I was treated to indignant whispers and even a shocked gasp or two from the crowd behind me, who had clearly come thinking they would be seeing a show and nothing else.

Me, I was busy enjoying the show. Aside from the audience participation – and it’s great fun to be sitting in such a rowdy crowd, let me tell you – the actors had clearly adopted a no-holds-barred approach to acting out the film. If a scene was in the movie, they did it. If Brad and Janet got stripped down to their underwear, that’s what they did. If Frank N. Furter ran a tantalizing finger down Rocky’s torso in the movie, you could bet that’s what the actors were doing.

Clearly, not everyone is going to enjoy being a part of a show like “Rocky Horror.” But if you can put your reservations aside for a night and enjoy throwing toast at a movie screen, this show is for you.