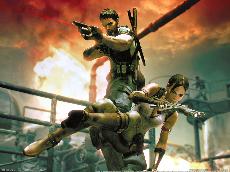 Before I begin, I just want to say that I am going to start my review of Resident Evil 5 with all of the aspects that I found to be negative. By the end of the review I promise that you will have heard plenty of good things about this game. Alright, here I go.

For anyone who has witnessed the awesomeness that is Resident Evil 4, Resident Evil 5 will feel very, very familiar to you. The control setup, bosses, and game play style are almost carbon copies of what was in Resident Evil 4. There is also a surprising lack of new enemies in 5. For example, there are still villagers with machetes, arrow shooters, dynamite throwers, buff guys with Gatling guns, mask wearing, chainsaw wielding dudes, and even snakes in boxes. All of these factors make it seem as though you are playing an extended version of Resident Evil 4. The few new enemies, however, are all extremely awesome, especially the new tribe enemies. They even brought back an enemy that last appeared in Resident Evil 2, which was cool.

While the variety of treasures has expanded since Resident Evil 4, I felt that there were far fewer to be found throughout the game, which is too bad because money becomes very important. And also, almost none of the bosses leave behind treasure or gold, which is very disappointing – in RE4, all of the bosses left you anywhere from 15,000 to 100,000 gold. Lastly, there are these emblems you are supposed to find, but the problem is they are too well hidden. I spend a good deal of time exploring my surroundings, and yet I have managed to find only 7 of 30, and I have played through the game twice.

I can’t believe that you don’t get a super cool weapon or something for beating mercenaries in RE5. When I heard that mercenaries were back, I was extremely excited. Mercenaries was the hardest side game I have ever played, and I spent forever on RE4 trying to obtain the highest rank in each of the missions in order to receive an incredibly powerful weapon. The mercenaries system was perfect: it had a sky-high challenge level, but it had a reward that made you never give up and to keep playing. I literally spent a year trying to beat mercenaries. But now that there is nothing to gain, what’s the point? I’m telling you, this is a missed opportunity.

Another aspect that I disliked was how the main characters have obtained matrix-like abilities, and a majority of them are mere humans. All of the other Resident Evils have had main villains who are incredibly evil, but are only human. I much prefer that, as it makes the story more believable.

One final thing I didn’t like about RE5 is the final boss battle. It is extremely repetitive, and instead of testing your skills at shooting and strategy, like the rest of the game does, it tests you to see how well you are at mashing buttons. And to make matters worse, it is extremely difficult do. So, in the end, you are left with a final boss focused around one mechanic, and that mechanic is nearly impossible to do… or maybe I just suck at button mashing.

RE5 is considerably shorter than RE4, but that is not necessarily a bad thing. RE4 was an extremely long game, and sometimes that started to wear on me. RE5 still comes in at around 15 hours, so I think that it is a pretty good length.

Fortunately, RE5 is still a blast to play, mainly because the RE4 system is so good, but also because of the new co-op feature. Co-op adds new levels of strategy to the series and it provides the biggest difference for RE5 from all of the others. It is true that having a partner working beside you totally changes the atmosphere this series is renowned for, which is the feeling that you are totally alone in a foreign, creepy environment. However, I find it to be extremely satisfying to run over and shoot monsters off of my partner. I also like how you are forced to coordinate who takes what weapons and who takes what side of a room or hallway. I really enjoyed playing through the entire game until I got to the last couple of chapters, mainly because they are almost solely dedicated to the last two bosses.

Many people are angry because the merchant from RE4 (a traveling guy who had a whole case full of weapons and would sell them) did not make a return appearance. I do think that the merchant is extremely awesome, but the new system that they have is a bit more practical, so in my mind the loss of the merchant is well justified. Now, at the end of each chapter and every time you die, the store screen appears, giving you the chance to switch out weapons or buy healing. This ties in nicely with the increased focus on strategy. In addition, I love the new weapons, some of which include a Gatling gun, a three-barreled shotgun, and a longbow.

I also like the new feature added to upgrading weapons. Instead of finding the above mentioned weapons scattered throughout the land (as you do for the other weapons), these weapons become available for purchase only after you have fully upgraded a specific weapon. This adds a considerable amount of replay value to the title. One other nice feature added to the weapons is the ability to make any weapon have infinite ammo, whereas in previous installments only specific weapons could be made to have an infinite supply of ammo.

The story does a really good job of tying most of the games together, and a few secrets are finally resolved. Even though the story is good, the voice acting and the dialogue aren’t as good, although it is okay because that is a staple of Resident Evil games.

So, all in all, Resident Evil 5 is a recommendable title to any fan of the series or just any gamer who likes shooters. I am still eager to play RE5, and most likely will still be at the end of this year. On a scale of one to ten, I would give this game a 6.5. The reason being is that it is not very original and the whole game felt as though it was played safe, but it still delivers a fun experience to be had. If you have a 360 or PS3, and are a fan of the series, I would check the game out at least once to be able to experience Resident Evil co-op, but it’s not an ardent purchase. No matter what I say, the truth is that, a month after its release, Resident Evil 5 still has me coming back for more, and that is the true measure of a game.