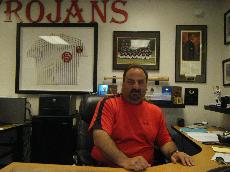 What defines a great coach? Is it the number of credentials they have on their wall? Or is it the accomplishments that have among the community?

Behind each good team, there is always a coach ready to lead players in the best way possible. In Skyline, among many coaches, there is a particular one that has impacted not only the campus, but also the community in a positive way.

Dino Nomicos is the head coach for Skyline’s baseball team. With 25 long years of coaching experience and a tenth Skyline season, he has been able to transform the athletic department and has made a difference.

Nomicos has been a player himself, he played for USF and right after graduation, he got the opportunity to work there as a recruiting coach. Since then, he has not stopped coaching, he continued to coach at Canada College, and after 7 years, he ended up at Skyline.

As a player, he knows the interest and goals that many of his own players have. Most players aspire to play for higher leagues and potentially get their education paid for. Nomicos knows this; therefore he makes academics the top priority for his team.

“The expectation is high, players are expected to transfer to a four year school and get scholarships,” Nomicos said. Skyline’s Baseball program has a reputation of helping students continue their education to four year colleges. Nomicos has ensured that throughout his entire coaching term, by sending his player to schools all over the country. About 90 percent of his players matriculate in four year universities, and about 80 percent actually get scholarships.

Nomicos has really made a difference – before he started coaching Skyline’s team, their average record was of two wins a year, now the average record is 28 wins a year. The record was not the only obstacle he faced; the facility was also in terrible condition. Nomicos and the team had many fundraisers to get a better field, and even got the San Francisco Giants to contribute to the cause. Nomicos believes that a combination of chemistry, good work ethic and good coaching staff, can bring much success to a team.

Nomicos believes that in order to be a good coach, he needs to have a good relationship with the players. He considers himself to play a big role on his player’s life, and he tries to influence them as much by showing respect and love.

“For a lot of these kids I am their brother, for some their father, I am their role model and have to make rules and follow,” said Nomicos. “The team is definitely part of my personal life, after kids go on to the next level, they usually always come back and even invite me to special events. That is when I know that I have done my job, because they keep coming back.” With five games left to the season, Nomicos plans to maintain his team on second place or better, and possibly take his team to the State Playoffs.