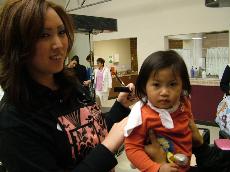 Skyline’s cosmetology department took part in the National Cosmetology Association’s nationwide fundraiser on Sunday, March 22, offering haircuts, facials, manicures, and more to raise money for the NCA Cares Fund charities. The event was held in Skyline’s PH building from 10a.m. to 3p.m. The regular rooms were converted into salons where the school’s cosmetology students, supervised by several faculty members, gave clients haircuts, manicures, facials, makeovers, or whatever else they could in return for a donation of $25. “It’s a nationwide event, with many schools and salons participating,” Laurie Biagi said, one of the faculty members coordinating the event. “We ask for $25 and then you can get the full service – a facial, makeup, eyebrow arching, manicure, or whatever else a student is available for.” The money being raised was donated to three organizations. The Look Good… Feel Better organization is dedicated to helping cancer patients deal with the appearance-related side effects of their treatments. The CUT IT OUT/Salons Against Domestic Abuse Fund provides women and children with help and awareness programs designed to protect them from domestic abuse. The NCA Disaster Relief Fund provides emergency financial relief to salon industry professionals who need to rebuild their lives after a disaster. According to Biagi, most of the people involved in the event were students, although there were staff members around to supervise, and there were a couple professionals that came in to help train and organize. The rooms were not crowded, but there were enough customers to keep most of the students busy. “It’s a good cause,” said Kelly O’conner-Tranter, who is the mother of the Cosmetology Club President. “$25 is a minimal contribution. Besides,” she said, laughing, “it’s the only chance I get to have my daughter work on my hair.” O’connor-Tranter’s daughter is a senior in the cosmetology program, and has been the club president since January. “We’re trying to involve ourselves more in the campus and the community,” O’connor-Tranter’s daughter said. Many of the customers were highly supportive of the cause, as well as trying to get more recognition for the cosmetology department. For several of the students participating, it was their first chance to work with a live client. “I love working with live clients,” said Ami Mankey, a freshman in Skyline’s cosmetology department. “It’s great to be able to apply what we’ve learned.” Though it is Mankey’s first semester at Skyline, she has a bachelor’s degree from SF State. In the eight-week semester she has spent in the cosmetology program, she says, she has learned perms, pin curls, haircutting, manicures, pedicures, hair coloring, roller sets and other techniques. “I think of it as my job,” she says, referring to the 8a.m. to 5p.m. classes every weekday. “It’s not like other academics.” Mankey doesn’t feel the class hours are unreasonable, especially given the short semesters. According to her, the classes usually spend an hour on theory for whatever they are covering that day, and then most of the remaining time is dedicated to perfecting the technique. “By the time you’re done, you feel confident in what you’re doing,” Mankey said. According to Nancy Lam, one of the faculty coordinators, the event was able to raise over $1500 for charity. Lam was unable to provide an exact number, as money was still coming in.