Who watches The Watchmen? 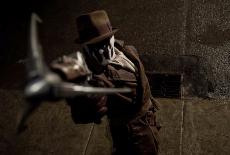 “Watchmen”, adapted from Alan Moore’s graphic novel of the same name, seemed like it was going to be a flop. Judging from the success of other Alan Moore interpretations (“League of Extraordinary Gentlemen”, to name but one), it seemed like it was hard to expect much. In fact, Moore didn’t even want his name associated with the movie; he was so convinced it was going to butcher his work.

And perhaps his concerns were well-founded. The novel “Watchmen” is considered one of the best graphic novels of all time. Adapting it to fit not only on the big screen but to cram all that material into three hours was certainly going to be a challenge.

There would have to be cuts, and changes, and I worried that they would alter the story so much that it would be unrecognizable.

I’m pleased to admit that I was wrong. The movie, while not 100 percent true to the source material, does an excellent job of telling the story that made the graphic novel one of the best.

The movie starts with one of the characters watching some talk show on politics. It does an excellent job of establishing the story – the world, on the brink of chaos and war, was saved only by the emergence of mask-wearing superheroes like Nite Owl and Doctor Manhattan. With their help, a nuclear apocalypse was postponed, and a semblance of order was restored.

But the people didn’t want an ungoverned body of masked vigilantes upholding the law, and so most of them were forced to retire.

Skip ahead to the present. The Cold War is still going strong, and even the cosmically powerful Dr. Manhattan may not be enough incentive to prevent war.

This movie was definitely intended for fans of the graphic novel. Not to say that the movie leaves anything out, but having read the novel lends a much deeper understanding of what’s going on behind the scenes.

My main reservations about the movie were, thankfully, dashed on the rocks. Chief among them, I was glad that Jackie Haley’s voice as Rorscach’s wasn’t as grating as Christian Bale’s in “The Dark Knight.” He managed to make it extremely interesting to watch Rorscach, even with his mask on, and that’s quite an accomplishment.

Also, I’d heard that the ending had been changed from the graphic novel’s version to something else. I wasn’t sure what to think of that, considering the history Hollywood has with Alan Moore adaptations. However, without giving anything away, I ended up liking it more than the novel’s version, which would have felt antiquated and gimmicky by today’s standards.

However, while the movie did eliminate my chief concerns, it managed to introduce some new ones. The gore, for example, was completely unnecessary, and only served to detract from the feeling that you were watching a comic book. I can understand the directors attempting to remain true to the novel, but most of the over-the-top gore was much less pronounced (or even not present at all) in the novel.

Another thing I could have done without was the sex scene. I understand that it was in the novel, and that it was important to character development and plot advancement and all that. But there are some things that shouldn’t be present in a movie – and sex scenes like this are one of them.

Maybe it stemmed out of the developer’s ideas to not hold anything back, but it felt awkward to watch. Bottom line, it was probably necessary, but it could have been done much better and more tastefully, and without resorting to cheap humor to get a few laughs.

Aside from that, however, I thoroughly enjoyed the movie. It’s far from perfect, of course, and the adaptation is not 100 percent faithful. But if you’ve read the novel, or are a comic book fan in general, I’d definitely recommend checking it out. And while you’re at it, pick up a copy of the graphic novel and treat yourself to one of my favorite stories of all time.