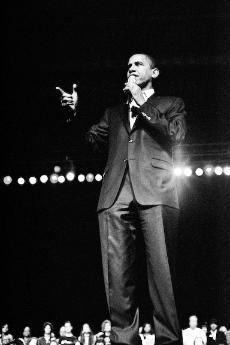 With the economy being at its worst since the Great Depression of 1930s and a war being fought overseas, Barack Obama came into presidency with a lot cut out for him. On his road to presidency Obama campaigned around the country with the promise of “Change”.

Many Americans, even ones who support Obama such as Skyline student Ana Mendez, believe that, “more people are going to come together because they see him as an honest and sincere person”, but they still don’t know exactly what his agenda is.

According to the President’s website (www.change.com/agenda/) three of his main objectives are to: Revitalize the economy, focus on ending the war in Iraq, and provide affordable and accessible health care for all Americans.

On Tuesday, February 17, President Obama signed a $787 billion dollar stimulus plan as an effort to end the recession that America is currently facing. This bill is planned to be spent on rebuilding America’s infrastructure, invested in clean energy research in efforts to help our economy go green, and to help provide health care in America.

Obama believes that “None of this will be easy” but it is essential in revitalizing America. He also plans on responsibly ending the Iraq war in phases and focusing on the fight against Al Qaeda and Taliban in Afghanistan.

To do this America will remove 1 or 2 brigades per month from Iraq and encourage their leaders to take political control over their government in phases.This withdrawal from Iraq is expected to help America invest in our own economy at home, which will work in conjunction with and help justify the stimulus bill Obama signed on February 17.

Having healthcare is an important aspect of many Americans’ lives, but unfortunately not every one has or can afford such accommodations. This is why Obama has set forth to overcome this health care problem.

He proposes to make health care work for the people and business’s, not just insurance and drug companies. Two of his biggest claims are that he will require insurance companies to cover pre-existing conditions for Americans and lower the cost for business’s to help pay for the expensive health costs.

In addition to these enormous tasks that the President is hopeful to overcome, he will also try to tackle many civil rights issues, such as repealing the “don’t ask, don’t tell policy”. Also, he will make efforts to secure or national border, working with Mexico to promote their development in hopes of decreasing illegal immigration.

Educational changes have also been set in motion that will assist many struggling college students. Families will be able to bypass the grueling task of filling out a financial aid application simply by checking a box on their tax form. To further aid students, they will be able to receive a sizeable tax credit for 100 hours of community service.

These are few of the many aspects of America that Obama is committed to “Change”. He claims that he cannot do this alone, for this “Change” to occur he asks for our help when he said, “For as much as government can do and must do, it is ultimately the faith and determination of the American people upon which this nation relies”.