Underage drinking not a question of age 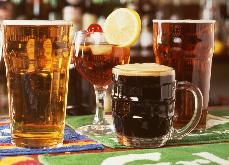 It’s not uncommon – especially in college – to be invited out to a party where there will be copious amounts of alcohol available to all, 21 or not. And it’s not uncommon to agree to have a drink or two even though you’re a few months young – after all, when you’re out with friends, who wants to be the downer that says no? And perhaps one thing leads to another and an hour later you find yourself doing shots with someone you know full well can drink you a mile into the ground, all better judgment and even a few upper brain functions shoved into some corner of your brain that’s dark and full of cobwebs. And then all you remember the morning after is waking up on your friend’s floor with various obscenities scrawled in drunken print on your arms and your head feeling like someone’s knocking rather rudely on your skull and won’t seem to stop. And you swear you’ll never drink again – everyone does after a night like that – but a week later you find yourself invited out again and the whole cycle restarts. I might not think this is the best way to spend your Friday nights, but that doesn’t necessarily mean it’s irresponsible. Many of the underage friends I know that drink do so in a (relatively) responsible way – they’re at someone’s house, they’re not driving around, and they’re with people that they know and like. I don’t think that makes it right, but I do think that of all the illegal things one could be doing on a Friday night, it makes it comparatively tame. And, of course, you have to look at the other end of the spectrum. There are plenty of 40-year-old alcoholics that have free access to alcohol before they’re 21. This is “right” according to the law, but most people would agree that it’s completely irresponsible – more so than the 19-year-old out drinking with their friends. This is one of the things that makes the drinking age a touchy subject. 21 seems a rather arbitrary number, especially when you consider the off-track examples above. Of course, not all 19-year-olds are drinking in a safe environment – some may tend to drink in more unsafe ways because they feel they need to hide it from their parents, friends, and especially the police, and because they may not know how to stop themselves once restrictions are suddenly gone. Similarly, not all 40-year-olds are alcoholics, and the good majority of adults know how to drink responsibly. I think that the age you drink at shouldn’t be determined by your age at all, but by how mature you are. If you’ve been exposed to how to drink responsibly and in moderation, I don’t think there’s any problem with drinking under the age of 21, since you’re far less likely to binge drink or drive drunk than someone who suddenly has access to alcohol. In fact, I’ve known a family to expose their child to alcohol very young – they’d give them watered-down wine with dinner and gradually water it down less and less as the child got older so they got used to the idea of drinking, and it was nothing special when they turned 21 and could get it for themselves since they had already been drinking responsibly for years. In short, I think that the arbitrary drinking age will never really work. Your age alone isn’t any real indication of how mature you are or how you would handle alcohol. However, until they come up with some sort of personality test that could determine whether a given person is responsible enough to handle drinking, the drinking age works well enough to keep a good number of irresponsible away from alcohol – even if those perfectly capable of handling it may suffer in the process.