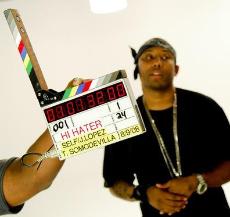 Listen For: Doo-Doo-Dumb verses dropped by Plies and Fabolous. Proclaiming, “When rappers hot – THEY PRAISE YA, when rappers cold, they spray ya,” Plies brings his signature raspy voice. And for all of those old enough to remember, Fabolous name drops, “I let the haters take a break, now I’m a let it out the bag like Jake the Snake.” Don’t forget to: Wave at all your haters!

Artist: Kanye West Title: Heartless [3:33]Sounds Like: Another Kanye Hit Kanye’s second single off of his newest album, which hasn’t dropped yet (808’s and Heartbreak), is titled Heartless. Just like the first single off of his album, Love Lockdown, Heartless is auto-tuned. Many critics are complaining that Kanye has “sold out” by more singing, than rapping, but it is obvious that Kanye is just trying something new; and it’s working because Love Lockdown is already at #3 on the Billboard Charts. In Heartless, Kanye sings/raps about his break-up with a girl, and although they both agreed to take a break, he finds himself still talking to her, only to find out that she is “heartless and cold.” It is one of Kanye’s most intimate songs about his personal life due to the fact that he just broke up with his long-time fiancée, Alexis Phifer. Kanye has said that his newest album, 808’s & Heartbreak is filled with “sensitivity that no one can judge.” Kanye, once again, proves why he is at the top of his game.

Recently Ne-Yo has been in to studio working with some of the industry’s most successful ladies – Rihanna, Whitney Houston and Anastacia – who have clearly had a major effect on him. In his latest single. Miss Independent, he applauds the virtues of a woman who “works like a boss” and “plays like a boss” and has a “car and a crib, she ’bout to pay ’em both off.” Even though that isn’t terribly romantic, it does provide an inviting change from the typical “shawty get low” lyrics of R&B. Ne-Yo provides excellent craftsmanship in this single, even if it’s not his most successful. As midtempo R&B tunes come this is a bit of a peach – the beats are sharp, the production positively gleams and Ne-Yo’s vocal is amazingly sexy.