Take it to the mats with Skyline Wrestling 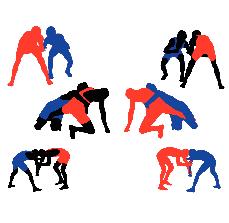 At the Skyline View we usually write about the usual athletics, soccer, volley-ball and baseball. So I’ve decided to write a reoccurring article about the athletics we rarely cover like Wrestling, Self-Defense, and Trail Hiking, just to name a few. This week it’s wrestling.

With a one tied and one loss season the team is off to a hard start but as Assistant Head Coach Jeff Silveira puts it, “the teams’ strong points are the teams conditioning, and our willingness to work hard. As far as wrestling technique. We have a lot to learn, and much to improve on.”

With hard training sessions and strict weight classes, which are 125, 133, 141, 149, 157, 165, 174, 184, 197, 285 pounds, to meet there is a lot of pressure on the team to improve for season. So everyday the wrestlers work out for 2 hours a day with, “weightlifting and do both long distance running and sprints. Our practices are very grueling. We definitely have the hardest workouts out of all the sports,” said Silveira.

Among the leading players of the team is Sergio Valdez (125lbs) who placed third at the Sacramento Invitational and leads the team with six wins. The other top wrestlers include Jairo Rodriguez (133lbs), Joe Heffelmire (157lbs), and Kyle Vance (197lbs).

“This year the Championships are in Victor Valley, and we plan to qualify more then 2” Silveira says.