Spore fails to live up to its potential 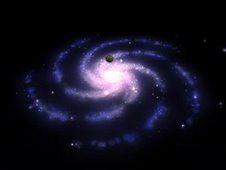 A shot of the entire Spore galaxy. ()

A lot of games have been suffering from over-hype recently. When a producer has a large game coming out, it only seems natural to get everyone excited. The problem is that when the game is released, it inevitably fails to live up to the promises that it will be the best thing since sliced bread, leaving the consumers with an average game and the bitter taste of disappointment.

Spore was one of the games subject to years of hype. But maybe that would be alright – it certainly seemed like a fresh and original idea. Here, I thought, would be a game that could potentially live up to all the hype, or at least justify it. So I swallowed my doubts, plunked down $49.99, and gave it a try.

Spore is broken down into five stages – cell stage, creature stage, tribal stage, civilization stage, and space stage. This sounds fantastic, but I quickly discovered that there are really only two stages in the game – “space stage” and “everything else”. I say this mostly because everything up to space stage can be accomplished in a matter of five to seven hours, whereas space stage might be finished in a week. I’m sure I’m not alone in the feeling that the first four stages are more of an excuse to get to space stage than anything else.

Even out of the first four stages, the Creature stage is the only one that even feels inventive. The cell stage plays out almost exactly like any feeding frenzy game ever made where you swim around as a fish in the ocean eating smaller fish and avoiding bigger ones. The difference is you play as a cell hunting chunks of food instead of smaller fish, and you can earn a few extra parts to help you survive.

Once you get your cell big enough, you stick some legs on it, call it a creature and advance to Creature stage. The main idea in this stage is to earn new parts for your creature, starting with arms, which you get within maybe five minutes. After that, the entire stage boils down into either making best buddies with all the new species you meet, or eating them. Either way you earn new parts to customize your creature. Interestingly, you can also rummage through skeletons lying about the planet to find new parts which you then apparently staple onto your creature – I guess nobody explained to Will Wright that evolution doesn’t actually work that way. Once I managed to suspend disbelief, however, I found myself enjoying the stage despite its minor flaws.

Sadly, the game is mostly downhill from there. Once your species achieves sentience you are given one last chance to tweak your creature before you enter Tribal stage. At this point I couldn’t help but feel bad for the game, like a well-meaning but destructive child who has attempted to make me a macaroni necklace but ended up setting fire to the carpet.

Everything fun and inventive about Creature stage is either thrown out the window or blown so out of proportion it’s not even remotely fun anymore. The “make friends or wipe them out” gameplay remains the key to progression, only now the peaceful species are at a severe disadvantage to the more warlike ones who can actually raise armies to raid your defenseless towns with. Once you’ve either played pretty music or thrown enough bodies at the other tribes, you’ll advance to Civilization stage.

Civilization stage, I found, was essentially the same game as Tribal stage with a few bells and whistles. Your individual creatures are replaced with land, sea, and air vehicles, and the two choices of how to take over other cities are expanded into three – you can take their citizens through religious zeal, buy out their cities through economic trade routes, or plain old steamroll them through military might. It is more fun once your planes can fly around the planet, but there still isn’t a whole lot to it and the shallow gameplay left me wanting more.

Once you take over all the cities on the planet, your creatures all band together in peace and harmony and build a spaceship so you can take to the stars in the Space stage. This is where the time unbalance enters into the equation – a casual player can expect to spend a week in this stage before they get to the “ending”. This is also the stage that feels by far the most incomplete.

Among my favorite gripes is the fact that whereas every other two-bit space-faring race you meet apparently had dozens of spaceships to throw away, your ship is apparently the only one in the fleet, and thanks to this I got bugged every five minutes with every attack, raid, or ecodisaster on my or any of my allies’ planets.

Also, there is no way I could find to search for star systems, so if I lost track of where my mission was supposed to be I was stuck checking the names of each individual system until I found it.

And without spoiling anything for those of you who may remain enthusiastic, when you get a mission that sends you to the galactic core, you find that you must maneuver through literally hundreds of hostile systems in an increasingly limited way. When you get to the core, you are presented with an “ending” that feels more like a bad joke than anything else, and then booted back out into the galaxy with little to no sense of purpose.

Admittedly, there are some rather impressive things about this game. There is an almost limitless number of possibilities for new and interesting creatures, and it seems that no matter how hard I tried to break the creator by sticking random arms and legs and eyes on my creature, the game always found a way to make it walk around and interact with the world in a mostly fluid and realistic way.

The concept of evolving your creature, while not entirely realistic in practice, is a surprisingly decent representation of the idea of evolving as a species in a way that will help you survive in the face of new challenges.

Also, the terraforming system is surprisingly dynamic, simulating erosion and dramatic changes in the ecosystem in a highly believable fashion, and more often than not I found myself boiling the oceans of enemy planets rather than trying to fight them simply because of how much more entertaining it was.

All in all, I believe Spore is an okay game with massive potential that suffers from ‘rushed game syndrome.’ The basic idea – a wacky and creative take on Darwinism – is good, but many aspects of the game feel unfinished, broken, or as though there should have been more.

If Maxis takes the same route as The Sims, we can expect to see much more content in a plethora of expansion packs that could make the game truly an experience worth playing. However, I’m not sure I’ll be plunking down any more of my hard-earned money to buy expansion packs with content that should have been in the game in the first place.