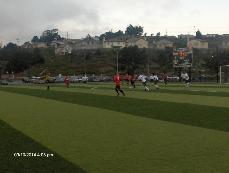 From the beginning it was a pretty exciting soccer match with Skyline scoring early on with a fantastic play. With number twenty-two Jesus Ochoa making a great pass from Shasta’s right goal post to another Skyline player who headed the ball into the goal. Throughout the game you could see their training showing in their skills on the field.

This is probably because, “they’re a very good, balanced team” as Head Coach Daniel Link puts it. He says that while there are no players that stand out among the rest their offense and defensive skills as a team were very evident as they beat Shasta College four to one.

After Skyline scored their first goal it was pretty much a back and forth game with some fouls by both sides and a couple of shots that came very close to hitting their mark. A little while later number eighteen, Brett Peix hit a long kick from Shasta’s left side and scored another goal for Skyline.

For the remainder of the first half it was more of the same back and forth, with Shasta coming close to scoring a goal but being blocked by Skyline’s goalie. There were some more scoring attempts from Skyline’s side but to no avail, they were blocked.

Then nearing the end of the first half Shasta scored their first goal making the score at halftime, two to one. After about ten minutes in the second half, Brad Kotlar scored the second goal for Skyline, broadening Skyline’s lead by two.

Very soon after that goal another goal was scored by number twelve, Jasper Garcia. While covered by two Shasta players he managed to get the ball in the goal and score one more point for Skyline. For the rest of the game there wasn’t anything else except a close goal which ended up hitting the goal post.