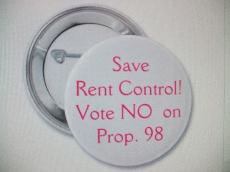 This year, more than ever, there is a need for students to hit the polls for the Primary Election Ballot in June and vote ‘hell no’ for Proposition 98. If you’ve ever had plans to move to San Francisco, Berkeley, or Los Angeles you may not be able to unless you enjoy living in a tent under an overpass. These cities are threatened by an attack by greedy, right-wing thieves who want to take your homes before you can even rent them. Prop. 98, under the guise of an Eminent Domain re-write, is out there for one reason only: to drive us out of the state we love. If the supporters of Prop. 98 have their way, rent control will be abolished. Those of us lucky enough to have it already will have it only for a short while-under Prop. 98, rent control will be phased out over a period of time. Those of us who don’t have rent control will be left standing in the aisles waving goodbye to one of the few simple laws that has protected the culture and community that the Bay Area has come to take for granted. According to the Chronicle, about 71 percent of San Francisco’s apartments are going to have their rent control status removed if this new proposition goes through. What does this mean for you? That studio apartment in the Mission District of San Francisco on Craigslist that you were drooling over will cost ridiculous amounts of money. Rent is stupid-high enough right now… we don’t need psychopath landlords charging arms and legs for rent. Speaking of psychopaths, Dan Faller, the President and Founder of the American Owner’s Association, has thrown over three thousand dolloars at funding the Proposition. This is a man who has published anti-tenant comments using words such as “terrorist,” a term that has lost any innocence it may have had since 9/11. His words are reminiscent of some of our president’s America-versus-the-monsters speeches, and this writer wouldn’t trust either of those men with his rent. What it all boils down to is you-you need to go out and do your own research into this controversial attempt at screwing over California renters. You need to take the initiative and protect your future living situations. You need to vote the way you know you should: ‘hell no on Prop. 98!”