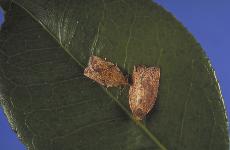 CheckMate, a relatively untested chemical, will attempt to eliminate these moths who threaten California's crops ()

Have you heard of the light brown apple moth?

This seemingly harmless creature is invading our state, threatening to destroy our thriving agriculture (there’s a list of the moth’s victims the length of my leg). The real problem, however, comes from our very own government: a pheromone concoction called CheckMate will be sprayed in Brisbane, Colma, Daly City, Pacifica, South San Francisco, and (most importantly to our little campus) San Bruno, if California Department of Food and Agriculture officials have their way.

CheckMate has only been tested once-and the results are enough to give me pause to consider. In Santa Cruz dozens of people complained of side effects after the pheromone was used to thwart the mating habits of the dastardly moth. An untested chemical plus people getting sick plus the government denying its side effects equals a nervous John Harrison. It should probably mean a nervous you, too. The need for a quick response to a devastating insect invasion is necessary and understandable, but releasing a relatively untested chemical with no knowledge of its potential side effects is really stupid.

If the plans for spraying CheckMate continue, we would all be sprayed without a say in the matter. Do you want to be strolling around campus one day and get a lungful of moth pheromones? This writer certainly doesn’t.

Visit the California Department of Food and Agriculture website at http://www.cdfa.ca.gov/ for more details on the light brown apple moth, CheckMate, and the effects of both on California.