The View from Here: 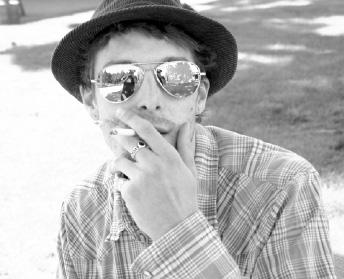 As I sit here writing this, I’m watching a great Western shoot ’em up flick, Tombstone. Ah, the history of this fine nation is told through the pop of gunfire. Being violent and getting what we want with force is part of our roots. When will we learn from our past and quit giving into our anger? Even after decades of advancing civilization and continuous technological growth, one would think that humankind would have grown out of violent habits. But these days, the focus on violence is ever present. In our music, our movies, on our nights out, violence is always there to greet us. It seems that the violence we encounter in these subcultures are just fragments of the violence reflected in our nation and nations around the world. Since the initial battle that spawned it, our own country has been in an almost constant military conflict. From within the country itself, the violence spread west, then into South America. It then leapt to Asia, until its recent settlement in Eastern Europe and the Middle East.But this kind of military upheaval isn’t constrained to just our country. Many European countries, such as France, Spain, and Russia, have histories penned in the blood of revolution. Asia as well has had a past sorrid with violence. But the wars in the Middle East, especially Israel, date back to biblical times. Is the violence in the media to be blamed on the violence around the world? Is the centuries old conflict in the Middle East the root of our nation’s obsession with anger? Or do the roots spread even deeper?If you care to believe it, the history of violence was birthed in the Bible when Cane murdered his brother Abel out of jealousy. Oh, and supposedly he was under the influence of the devil. Now I’m not saying that every violent act is the work of the devil, what I am saying is that violence seems to be a part of human nature. Getting angry is just something we do as human beings, it’s inescapable. But don’t think I’m going to just give up that easy.We can still control our anger and especially our actions. Focus the anger and frustrations, and release them in a constructive and appropriate manner, like taking up an artistic hobby. Painting, writing, and even dancing are all great ways to focus negative emotions. And they’re much more pleasant than stabbing someone for a parking space.