Book Of The Week: 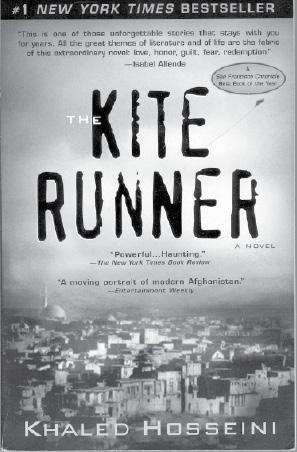 The dynamic first novel by Khaled Hosseini follows the life of an adolescent named Amir up until he reaches adulthood, and traces his experiences growing up in chaotic Kabul, Afghanistan that is coincidentally on the verge of an ugly revolution.Amid all of the chaos, the novel tries to revolve around the various relationships that Amir encounters throughout his life, ranging from dealing with his ever-disapproving father, Baba, his loving wife, Soraya, and his faithful friend, Hassan.However, the story focuses more on the relationship between Amir and Hassan than any other pair in the novel. Amir is the weak little boy who is constantly pampered and spoiled by his rich father, and on the other hand, Hassan is the son of a servant, living to protect and to serve Amir at all times. Whether it be running errands for Amir or standing up for him and fighting bullies, Hassan is always there for him. Unfortunately for Hassan, the friendship that he shares with Amir is linear. He loves and respects Amir and will obey him at his disposal, but Amir has no respect at all for Hassan and treats him no better than a dog on a leash. As time passes by, the annual kite-flying tournament eventually arises, and Amir’s greatest dream and most horrific nightmare occur on the same day for the young boy. Not being able to help Hassan when he absolutely needs it the most will result in Amir regretting the day for the rest of his life. Eventually, a war breaks out, so Baba and Amir flee the country, leaving behind Hassan and his father and head for California, where Baba runs a gas station and Amir attends school full-time. As Amir reaches manhood, he is now happily married and watches over Baba, who is suddenly ill and unable to care for himself. However, the nightmare of not helping Hassan in his time of need followed Amir all the way to America. Under certain circumstances, Amir is requested by an old family friend to return to the place he once called home in order to help out Hassan and his family. Reluctant at first, Amir decides to come to his aid with the mindset that if he helps Hassan this time, that it would make up for the time that he wasn’t there for him, and to also rid the guilt that has coincided with his life ever since that horrid event took place.A return to Kabul reveals to Amir how much his home has turned for the worse. Homeless people walking around with limbs missing and homes broken apart due to gunfire and bomb explosions only show glimpses of what Amir was fortunate enough not to witness from the war.As Amir goes forth with his mission, he is met hand in hand with both secrets and twists that reveal themselves one after the other. However, Amir lets nothing get past him. His quest is no longer about helping Hassan anymore, for now he is set out to prove to himself that he can stand up for himself and fight his own battles, and to become the man that his father had wanted for him to be. With his very first book, Hosseini captures the true essence of Afghanistan and its culture, regardless of whether the book takes place in Afghanistan or California. The character development is superb, and the twists in the story never cease to continue, adding more excitement to the story. I could say a lot more about the book, but I feel as though I’d reveal more than I already have. So to get the rest of the facts that I tried to hide from you, I truly recommend reading this New York Times Best Seller.