Skyline gets the blues 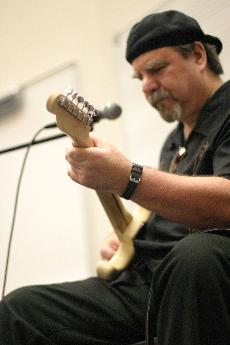 Kenny 'Blue' Ray played some blues music for an audience of Skyline guitar students and others on April 27. (Bob Varner)

With a soulful melody and a toe tapping blues beat, professional guitarist Kenny ‘Blue’ Ray played his electric guitar for a room full of Skyline guitar students as well as the general public, Thursday, April 27.

Ray, who has been playing guitar since he was a small child, talked to the audience about guitar technique in playing, such as bending the strings to acheive good vibrato. Ray was accompanied on guitar by Skyline guitar instructor, Frank Markovich.

Markovich met Ray ten years ago at a guitar show at the Cow Palace.

“He had this great vibrato,” Markovich said. “He could make a guitar sing.” Markovich later took lessons from Ray and said he was thrilled to have the opportunity to have Ray come to his class.

Markovich also noted that Guitar Player magazine donated their latest issue for the show and helped sponsor the event.

Ray, who lives in Menlo Park, came up to Skyline free of charge.

Ray says that he prefers the blues to other music

“It has more feeling, more soul to it,” he said.

To students interested in taking up guitar, Ray said

“If you’re going to do it, devote your life to it.” Ray said if students are not going to devote their life to it, guitar can still be a great hobby for many.