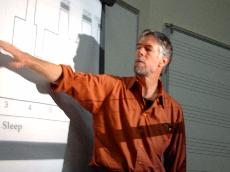 Larson graduated from University of California Davis with a bachelor’s degree in psychology. Before he became a psychology major, Larson said he wanted to be a dentist.

“In high school I was into playing golf and I knew that dentists played golf at least once a week,” Larson said. “I thought they had a good lifestyle.”

Once Larson started taking the required science classes for becoming a dentist, however, he realized that dentistry wasn’t for him. As part of those requirements, Larson was required to take an introductory psychology class. In that class, his interest in psychology began to grow.

Larson said that it was learning about human motivation and behavior that drew him to learning about psychology, “why we act the way we do and understanding the nature of what it is to be a human being,” he said.

“He’s kind of the person that got me interested in understanding people,” Larson said.

In addition to psychology, Larson, a long-term California resident, also has an interest in meditation and eastern philosophy. While at Davis, he took classes in such subjects as Buddhism. Larson said that studying these philosophies helped him on his quest for searching for what was real in his life.

“What is really real about being alive?” he said.

Larson mentioned that although these philosophies, come from various traditions and cultures, most groups are saying the same thing about the nature of human behavior.

Larson started out at Skyline as a financial aid officer in 1987 and was hired as a full-time counselor the following year. Skyline’s karate club was formed in 1992 when a couple students learned that Larson practiced martial arts and asked him to act as a club adviser. The club grew and eventually became the Shotokan Karate class; COMB 404/405.

“I’ve always tried to look for new ways to learn,” Larson said on his interest in karate. “That’s why I took up martial arts, not because I like to beat people up.”

Larson enjoys his ability to work closely with his students in his karate class, talking about the philosophies of martial arts and the discipline involved. Larson says that he tries to incorporate information that is relevant to his students’ lives in his classes whenever he can.

And Larson doesn’t plan on changing his job anytime soon.

“I’m one of the fortunate people that really loves what they do,” Larson said.