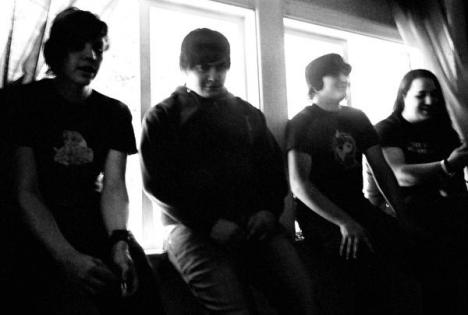 San Francisco’s Mission district: Infamous for mysteriously delicious burritos, and a cheap, hole-in-the-wall bar/art loft better known as the Balazo Gallery. It is here where many up-and-coming local bands and artists gradually make a name for themselves. Tonight’s lineup consists of the peninsula hardcore band Love, Hope, and Fear, and a little bit of randomness that makes them up.

Love, Hope, and Fear was born in 2002 when lead singer/songwriter Alex Pulisci pulled together two friends and made it happen. The band lasted through the end of 2003 when the two other members pulled out of the project, and Pulisci contemplated starting a new band entirely. “I had already primarily wrote most of the music”, Pulisci said “and any band I would have been in would have played the same type of music. It seemed really silly to scrap two years worth of work behind this name”.

It’s a good thing Pulisci decided to keep the band alive. For the next few months, he went through a number of different band members and musicians until he came across Frank Diamos, a drummer who responded to an ad on craigslist. After a short time playing together, and even recording an album, Pulisci and Diamos found Ed Sawicz, the guitar player they had been looking for. Shortly thereafter (earlier this year) came bass player John Schmitt, who left Portland, Oregon for the Bay Area to play with the band permanently. The band soon found that they had a chemistry that only successful bands have. They practiced straight through for three months, and began playing shows. They found that they had a rather large fan base and following. Love, Hope, and Fear was set, and here to stay. The band’s sound could easily be to blame for the fan base. Although they have a completely unique style all of their own, some of their influences are A.F.I, Poison the Well, Nerve Agents, and Death by Stereo. Pulisci, who can be compared to Davey Havoc of A.F.I. when performing, is grateful for their influences, but doesn’t want to be mistaken for any of them.

“We definitely want to have elements form other bands,” Pulisci said, “but I don’t want someone to listen to us and say ‘oh yeah- they sound just like that one band’. We want to be compared to our influences, but we want to sound like ourselves.”

The crowd-friendly members of Love, Hope, and Fear just left the studio, and are currently further bonding on a tour along the west coast, and all the way down to Pheonix, Arizona. They are also scheduled to shoot a video for their song ‘Word as Clouds.’

The chemistry that lies between each band member is unique and personal; brotherly, in a way. As a band, some of their better memories together consist of having no money for a toll, a car full of potatoes, and their very first live show they all played together. A chemistry is what essentially fuses a band together. And not to mention their attitude, which strictly insists on keeping the peace.

“What I want people to get from [our music],” Schmitt said, “is that all of the BS things that are going to happen, and all of the smack-talking that goes down needs to stop. People just need to hear music- even our music- and just have a good time no matter what.”