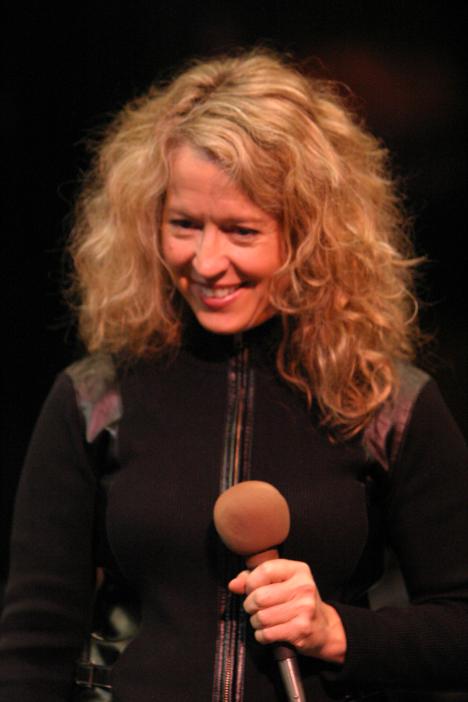 On Sept. 15 and 16 Skyline College was granted the opportunity to feature a guest artist; professional jazz vocalist, actress, educator and songwriter, Ellen Johnson.

Johnson came up from her home in the Los Angeles area to give Skyline students important information on how to make it in the performing arts, informing them on how the entertainment business works, teaching them to make use of the internet in marketing themselves and showing them how to stay inspired and believe in themselves.

Johnson opened up her first workshop on Sept. 15 by asking her audience’s names and information on their specific interests in the performing arts as well as any future goals they might have.

“We just did the first thing that’s important in the business,” she said upon conclusion of the introductions. “It’s called networking.”

Networking, Johnson says, is everything. It’s how you make connections with people who may one day help you in your career. With networking you can find potential band members, writers or producers.

“It starts here, it really does,” Johnson said. “It starts in the colleges. It starts when you meet people and group together.”

Johnson wrote “Art vs. Commerce” up on the black board. Instead of thinking of the two concepts as “fighting” each other Johnson says she likes to think of art as getting to know how to work with commerce.

“First and foremost I think of myself as an artist and I just happen to be in the business.” she said.

When you go into the entertainment business its all about entertainment Johnson says. In the popular reality TV show, “American Idol” many truly talented singers audition but according to Johnson, talent may not be the judge’s most important criteria.

“Because you probably wouldn’t tune in every week if you didn’t see the funny guy who sings out of tune and [the producers] know that.”

Ultimately, Johnson says to make it in the performing arts you should have talent but you also need to know your craft. One of the ways you can do this is by surrounding yourself with the best talent out there, learning from the best as you develop your own talent. And with most skills you develop, practice is a must. Johnson emphasized the need to practice and rehearse your craft frequently, you could have a lot of talent but according to

Johnson if you don’t know how to focus it it’s not going to do you any good.

Johnson says you should learn your craft because it’s what you love to do.

“If you love it that’s great,” Johnson said, “Are you doing something everyday you love? Because if you are that’s great success.”

Johnson also emphasized the need to surround your self with good teachers and mentors.

“You’re very fortunate you have wonderful teachers here at Skyline.” Johnson said. “They care about you-they bring in guest artists!”

And Johnson says to believe in yourself at all times and to never say that you just can’t do something.

If you go to an audition and you don’t get the role it may not have anything to do with how talented you are, according to Johnson, you might have been rejected because you just weren’t the type they were looking for. Johnson says you could get called for 1000 auditions and only manage to get two or three callbacks. It can be really difficult to make it into the entertainment business, but if performing is something you really want to do Johnson says to never give up.

“When you watch people on TV and hear their stories you will discover they have been doing this for a long time,” she said. “It’s very rare that someone will walk into the room and say ‘I want you to be the next star.'”

“You also have to be willing to do what it takes to get the role you want” Johnson said. Sometimes you have to move to a different location, or take a role you don’t want. Sometimes, Johnson says, you might be required to stand out in the pouring rain on a boat for two hours because it’s what the scene requires. Johnson says you have to stay inspired and to do this she says to find the things that keep you inspired.

“That’s what great poetry and quotes are for.” She said adding a good group of supportive friends is always a plus.

The next step after learning your craft is to promote yourself.

Promoting yourself today is a lot easier than it was before, due to technological advantages such as the Internet and CDs. Today you can make CD recordings of your singing and can create online “press kits” to place on your website. These press kits should have your photo, resume’, bio, an MP3 from your CD, and a tear sheet, which is basically a collection of your press reviews. Johnson says a website can be a very valuable tool as it serves as a convenient way to sell yourself and allows people to find you. In addition, once you put yourself out there on the web you now have the potential to reach the whole world.

“We live in a time where you can be an independent artist and you guys are the future,” Johnson said. “Right now is a great time in the music industry for new things to happen, because you can be online and you can sell your own product.”

Johnson says there are even a number of major artists who are giving up their labels to sell their own product because they can make more money that way.

In Johnson¹s second workshop held on Sept. 16 she worked on the stage in the main theater with the microphone, improvising songs to a jazzy blues tune. She worked with the audience and together they created new creative lyrics and new sounds singing about anything that popped into their heads.

Johnson’s says her love of jazz can be attributed in part to her love of improvisation and creativity.

“That’s why I like jazz. I get to create something new,” she said, adding that she enjoys that challenge of not knowing what she’s going to say next it’s “Spontaneous” and “Just being in the moment.”

Johnson says she wishes to thank the Skyline Students for embracing her and sharing and giving while she was presenting here. She encourages them to use anything they got from the experience in any part of their lives whether it’s for music or some other career.

“Music is about expression,” Johnson said “The bigger meaning of what I’m doing besides just entertaining people is to say express yourself, be creative, and let yourself be who you are all the time.”