Dim Sum is some kind of wonderful 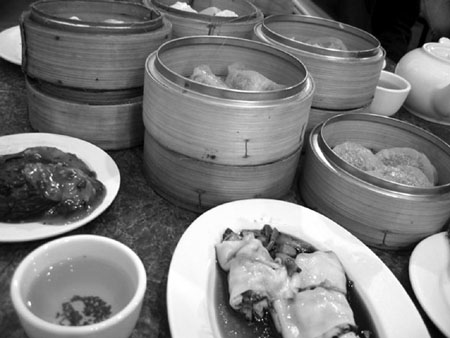 At a typical restaurant, the host or hostess leads you to a table and hands you a menu. On the menu, food is separated into appetizers and entrees, making it easier to some and harder for others to choose the meal they want to eat. But imagine going to a restaurant where all you have to do is open your senses, pick the food you want, and get it in the exact moment you ask for it.

In many Chinese restaurants, the morning menu is no morning menu. At a time where people spend time with their families or conduct business meetings, dim sum is a fun and tasteful past time where you do not have to waste your time on menus.

A great Chinese restaurant that serves dim sum is King Wah of Westlake, in Daly City. Popular to the masses, as the doors open at eleven o’clock on a Saturday morning, crowds of people rush in to take their seats. And the moment you sit down, the tea of your choice, most likely green tea or jasmine tea, is offered and carts of food literally stroll down your isle.

The King Wah restaurant makes the dim sum experience worth while. Not only are the steamed Har Gau, (shrimp dumplings) savory and delectable, but finishing a dim sum meal off with mango pudding and sweet egg-custard buns is almost like heaven.

But you will not enjoy any dim sum without knowing how to eat it. Eating dim sum is an art to use your senses and be smart about what you choose. Because certain tastes appeal to different people, merely looking at the food won’t cut it. You have to smell what the strolling carts of food have and at the same time see what appeals to you, because dim sum comes in a wide assortment of sweet, savory and spicy foods.

The food is often served in steam trays with holes on the bottom so the food can remain warm in the carts, and for the most part there are a number of trays in just one cart. So, if you like a particular tray, don’t worry because more than likely waiters and waitresses in the King Wah restaurant will stroll by you more than once.

Dim sum is translated in many ways. Some people refer to dim sum as “touching your heart” and others refer to it as the “heart’s delight.” If it is any consolation, both translations prove true in King Wah’s dim sum.