The Skyline View • May 1, 2005 • https://www.theskylineview.com/uncategorized/2005/05/01/religion-and-censorship-in-the-science-classroombr/

Religion and censorship in the science classroom 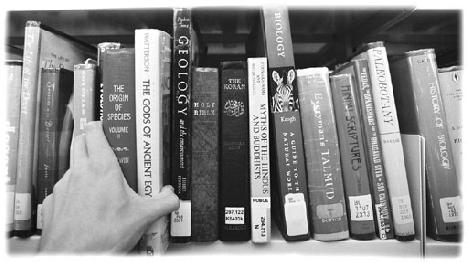 I turned on the radio yesterday and heard yet another talking head exercising her freedom of expression as she condemned the “creationist wackos” trying to “shove religion down the throats” of American students.

Unfortunately, as the debate over whether or not to teach non-evolutionary theories in public schools simmers toward the boiling point, it probably will not be the last time such a narrow-minded idea is broadcast. The media and most mainstream scientists are continually treating this debate like some sort of prize fight between science and religion. Due to all the shameless irrationality and name-calling, though, it’s getting rather difficult to tell which side is more religious about their position.

In what may go down as one of the least sensible rulings in the history of law, US District Court Judge Clarence Cooper recently prevented a Georgia school district from placing a disclaimer sticker in some high school science textbooks. He based his decision on the idea that the stickers endorsed religion, thereby violating the First Amendment. The disclaimer read:

“This textbook contains material on evolution. Evolution is a theory, not a fact, regarding the origin of living things. This material should be approached with an open mind, studied carefully, and critically considered.”

No mention of God. Nothing promoting creationist agenda. Just wise words for living a life of healthy skepticism that any religion-free evolutionist could appreciate.

But in effect, in an unreasonable attempt to eschew all things religious, Judge Cooper outlawed possession of an open mind, sending the message that students should not study things carefully or critically consider scientific theories. Ironically, the mainstream scientific community rejoiced.

But what is science anyway? And what’s religion got to do with it?

As any modern science textbook will tell you, true nonreligious science deals with observable, repeatable processes. Known as the scientific method, this idea, which is fundamental to all of modern science, was popularized by 17th-century creationist Francis Bacon. Clearly, for Bacon, being a man of faith didn’t cause him to abandon science. Revolutionary creationist scientists such as Kepler, Newton, and Pasteur apparently agreed, as do numerous highly qualified creation scientists today. The thing that qualifies them, and any scientist, as good scientists is that they follow the scientific method of repeatable experimentation and observation.

In fact, at their most basic level, origins theories are not scientific at all.

For one thing, the theory of evolution that states that people evolved from particles over millions of years is impossible. To say that complex systems of life we see today came from a simple, common ancestor that nobody observed an extremely long time in the past goes against logic and set-in-stone scientific laws, such as those laws of thermodynamics most of us had to memorize in high school.

Creation, however, is also impossible for the same reasons. The basic idea that something or someone just spoke everything into complex existence also crumbles when it hits the cold, hard wall of scientific reasoning.

And yet, here we are, existing for some reason.

In reality, no one, if they believe they exist, lives without faith in something that cannot be scientifically proved, whether it be God, big bang, aliens or Zeus. Any specific ideas about the origin of life, then, do not rely on truly observable, repeatable, scientific processes; they rely instead on the faith of those who promote the ideas that something somewhere started living.

Evidently, not even Charles Darwin himself could keep from basing his theory ultimately on faith. After observing all the evidence, he wrote in “The Origin of Species,” “Probably all the organic beings which have ever lived on this earth have descended from some one primordial form, into which life was first breathed.”

Darwinian evolution provides no real scientific answers for determining the origin of that life that “was first breathed.” The whole thing is based on faith.

And you thought public schools weren’t faith-based institutions? Maybe it is time to think again.

Many of the world’s most scientifically-minded scholars actually are thinking again. Books like biochemist Michael Behe’s “Darwin’s Black Box,” mathematician William Dembski’s “The Design Revolution,” and biologist Jonathan Wells’ “Icons of Evolution: Science or Myth?,” are gaining popularity as more and more people question the orthodox evolutionist view and investigate other scientific theories.

Anthony Flew, once called the most influential atheist philosopher in the world, recently renounced his atheism because, he said, life is too complex to have evolved in the absence of an intelligent designer.

These people are highly qualified scientists and critical thinkers, not ignorant religious zealots, as some talking heads would like you to think.

You don’t discredit a scientific idea by attaching it to an adjective like “religious” or “fringe” or “wacko.” You discredit an idea by pointing out its wrongness. And if you’re uneducated about the actual positions taken by those religious fringe wackos, how can you point out their wrongness? And if you’re not given a fair and balanced presentation of all the facts and the ideas based on those facts, how can you claim to be educated?

We need more, not less evolution taught in our schools at all levels. We also need to ask some hard questions and examine all the evidence even if that evidence points in a different direction than we are used to.

As long as students are fed the religiously one-sided dogma that evolution is the only credible theory and all other ideas are suppressed, we are being miseducated and the basic principles of democratic society are being trampled. Just as democracy thrives on competing ideas, science thrives on competing theories. If the theory of evolution is valid, the teaching of other theories will only reinforce its validity. If it is not valid, science will benefit from a much-needed update. Real, objective scientists have nothing to fear.