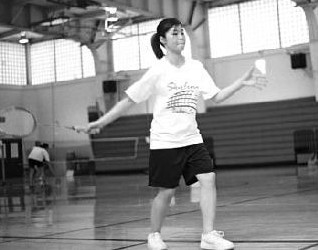 Already halfway through their season, Mabel Lee (pictured) and the Skyline badminton team are looking for another title. ()

Skyline’s badminton team has had an outstanding start to their season, having won every game so far. Coming off their undefeated season last year, the team has almost no problems.

Coach Fosberg said that she has a player that cannot make games on Thursdays, which changes the rank of the players at a match. At every match, each player is matched up with a player of the same rank from the opposition. When a player is missing, every player gets moved up a rank. It’s not too late to join the team; Coach Fosberg is still welcoming anyone who wants to join the Trojans in order to prevent being short-handed in future games.

The badminton team came in second in the state last year with an undefeated conference record, falling only to the Irvine Valley College team. Skyline is ready to have a repeat year.

The Trojans started off the season with a win on the road against City College of San Francisco on March 29. Stephanie Cheung returned from last year’s superior team and continued to prove why she is ranked #1 in both singles and doubles by sweeping both her singles and doubles matches. Cheung and the team kept CCSF to 6 points while hitting their way to 15 points for the victory.

Skyline then won their next game at home shutting out Mission College, 10-0. The Trojans demonstrated why they are the defending northern California champions by sweeping all 12 matches against Mission.

The girls next crushed Fresno City College at home with a score of 14-7. Continuing her perfect season, Cheung dominated her singles and doubles matches. Gina Gomez captured the #2 rank in singles and shares the #1 rank in doubles with Cheung. Gomez won all of her matches as well.

CCSF got their chance at revenge on April 12, when Skyline faced them at home for game two of the best-of-three-games series. In one of the closest matches in almost two seasons, Skyline defended their perfect record with a score of 13-8.

The exciting game showcased Stephanie Cheung still undefeated in the #1 position and Gomez remaining in the #2 spot. Lisa Payte, Roseanna Tan, and Gloria Cheung all contributed to win, beating the opposition and putting points on the board.

The team is halfway through their season and is looking to continue their success. Coach Fosberg is confident her team will maintain their undefeated status. Coach Fosberg also said Cheung and Gomez earned their spots in the finals and that other players can definitely claim spots as well.