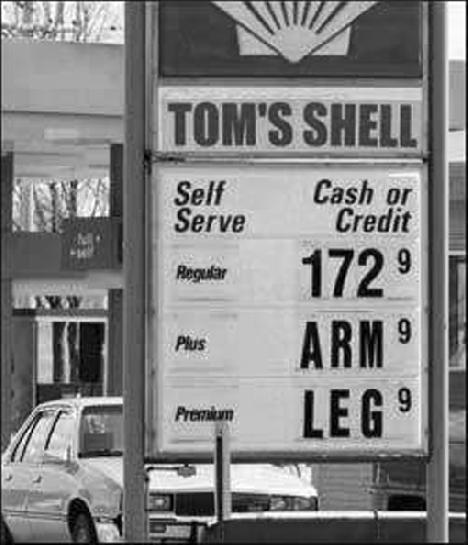 Have you read these headlines lately? “Record oil prices equals record gas prices at the pump” and “Crude oil hits $54 a barrel on strong demand”. It seems that every few hours there’s a new gas price posted at your local gas station which is, of course, higher than the price it was an hour ago.

It’s expected to rise even further in the coming months, thanks to the summer season and rising oil barrel prices. People love driving in the summer, especially on long trips, which means more demand for the black gold.

Students have to be concerned with more than just homework, midterms, and final exams these days. Add filling up the gas tank to the list. Some students don’t care about paying extra at the pump, because hey, there’s nothing you can do about it anyways, right? Well, not exactly. You can try to drive more efficiently and keep your car in good shape, plan or combine your trips to save gas, and invest in a more gas-efficient vehicle.

I raised a lot of eyebrows when I used to drive around in a Cadillac that had a 4.1 liter V8 engine. That car drank gas like an urban camel. I kept looking under my car to check if there was a hole in the tank or something. I was asking myself, ‘where’d all the gas go?’ I mean, I just drove from home to school and I was already on low. Yes, I know what pain is.

So, who’s to blame? Let’s start with the finger-pointing because you know that’s what we all love to do. Is it the SUV drivers? Is it Big Oil? Is it the war in Iraq? Is it Bush? Are we just being manipulated? Or could it be that America doesn’t have enough oil refineries to process the oil to meet demand as the Saudi foreign minister said on TV? I believe that it’s not one thing, but many factors that has brought us to this situation.

As I write this, I’m seeing plenty of electric hybrid cars on the roads; the Toyota Prius, for example, gets 60 miles per gallon in the city. In some places, there’s a six- to eight-month waiting list just to get a Prius.

Don’t feel bad, there are plenty of people who aren’t ready for a Prius just yet. In the meantime, see the sidebar at right for some things you can do for your gas guzzler.

Make sure your tires have the proper air pressure. Check your owner’s manual for the right number.

Check your trunk for excess baggage that you don’t need. Those extra loads can eat up a few gallons of fuel.

Don’t drive around town to save two cents a gallon at a cheaper station. You’ll end up paying more than you save.

Try to avoid rush hour traffic. Sitting in stop and go traffic is one of the biggest wastes of fuel.

Air conditioning eats up about eight horsepower. Roll down the window instead.