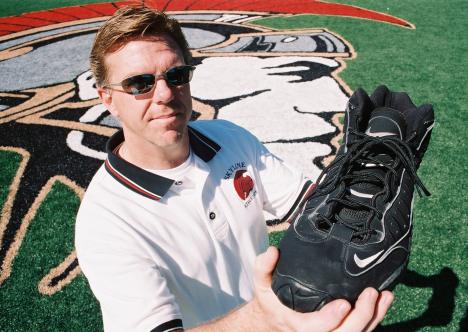 As head of SkylineÂ´s physical education department, Dean of Athletics Andreas Wolf says he wears "a couple of different hats." With responsiblities that include administrating, teaching, budgeting and scheduling, he also has some pretty large shoes to fill. (Neill Herbert)

“Whatever happens, happens for the best, I try to live my life by that motto,” Dean of Physical Education and athletic director, Andreas Wolf said. “My father has been telling me that quote pretty much my whole life.”

Wolf is completing his third year as dean; he began the job in June 2001.

“I think I’m doing a good job,” Wolf said. “I also have assistance from the faculty.”

“I do wear a couple of different hats,” Wolf said.

Before taking the position he has now, Wolf was a P.E. instructor and men’s soccer coach here at Skyline. The athletic dean position opened up, and Wolf decided to take on the challenge.

“I love teaching and coaching,” Wolf said. “It wasn’t like I got bored of it and went looking for something new. I like new challenges in my personal and professional lives and I saw potential for the athletic division that wasn’t being realized.”

Wolf says it is important for students to participate in any kind of exercise, whether it is a physical education class, dance class, or sports team. Obesity has become a huge issue for people all over the country in recent years, and with a little bit of exercise that problem can be greatly reduced. According to Wolf there are a couple of reasons for the increase in overweight Americans.

“Kids don’t play anymore,” Wolf said. “When I was younger, it used to be that you played all day until 5 minutes before it got dark. Now kids stay inside all day playing on the computer. We live in a fast food society; I used to always get home cooked meals. If my mom couldn’t cook it, my dad would.”

Budget cuts affect the athletics and art programs first, so when cuts have to be made, the athletics program usually gets hit the hardest.

“I hate confronting instructors with a negative, so I try to also have a positive,” Wolf said. Wolf had to go to Coach Mike Fitzgerald with the bad news of cutting some of his classes, but also gave him the opportunity to instruct the new spinning class at Skyline. Fitzgerald got excited about the class and developed and created the curriculum, the resources needed were obtained and now that class is one of the most popular classes. Wolf said the spinning class is a unique, modern class that gives students another exercise option. The yoga and Pilates classes are also popular classes that always fill up quickly.

The physical education program is introducing an exciting new class: personal training Certification. To teach the class, Fitzgerald, who will be the instructor, is doing tremendous work in preparing to become a certified personal trainer. Wolf is shooting for spring of 2006 for this class to be a part of the curriculum. The class will offer the students the opportunity to become certified in personal training.

Wolf encourages students to taste a little bit of everything in academic courses and sports courses, like he did. Wolf says that had he not tried many different courses, and changed his major as many times as he did, he might not have the same profession he has today.

Wolf was an athlete himself, before becoming a teacher and coach. He played goalkeeper in soccer and was a member of the National Association of Soccer Leagues (NASL) professional League. His highest achievement in soccer was in high school, when on the U.S. National team he traveled overseas to play in Europe.

After high school, Wolf pursued his career, not his education. Many colleges recruited him, some down South, some on the East Coast, but he stayed here and went to SF State.

“I didn’t want to leave the Bay Area,” Wolf said. “I loved the weather, the climate, everything.”

In college, Wolf continued to play soccer and majored in business. He hated business, after only going in it to make money. While in his junior year at college, the NASL folded, and there was no other professional league in the country. At that time it was unheard of for American players to play overseas.

“I realized life was too short to wear a business suit and do something I didn’t want to do,” Wolf said. “Money wasn’t the most important thing in my life, I was more interested in giving back.”

Wolf had loved playing soccer so much, being a coach interested him. So he decided to pursue coaching to teach some of his knowledge to students.

“I think I have touched a lot of people in my life, being a teacher,” Wolf said.

Wolf loves working in this environment and feels the best thing about working at Skyline is the students, and while Wolf lives his life without regrets-there’s one thing he might possibly change.

“If I could maybe change one thing, it might be to have come to school here,” Wolf said. “I am so thankful that the NASL folded, it gave me an opportunity to work here.”

Wolf describes himself as a pretty easy-going guy, and not a lot can get him real upset. Wolf also says that he is well organized, creative and looks for the positive in any situation.

The faculty around Wolf assists him in all he does and Wolf works to get them all to create unique ideas and act like a team.

“They support me,” Wolf said of his faculty. “They know I came from within the ranks and they help me out.”

Wolf continues be creative in developing fun ideas for the athletics department.

“I look for the silver lining and that’s why I’m successful,” Wolf said.