Forum offers a glimpse into politics 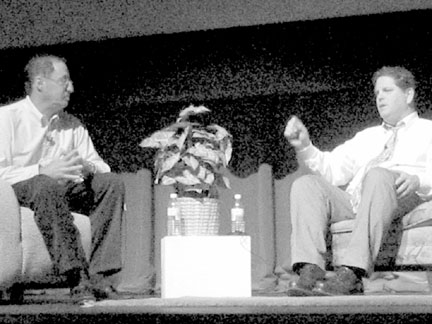 If you were fortunate enough to be at the Main Theatre on the evening of Oct. 20, you may be one of the few Skyline students who have any idea of what’s going on in this presidential election, or in any election, come to think of it. The presentation “How do we know who is telling the truth” was an informative peek into how our system of government works and how our politicians really think.

Mark Simon, an award winning journalist and Skyline graduate, Bob Marks, director of the Emmy Award winning “Peninsula TV,” and Phyllis Taylor, Skyline College speech professor and moderator for the discussion, took their seats onstage in front of a chatting, restless group of Skyline students. Playing over the speakers, Green Day’s “Time of Your Life” drifted through the theatre. The discussion was beginning.

Lori Slicton stepped to a podium and introduced everyone, stating the goals of Common Ground before the presentation began. Common Ground, as Slicton explained, helps bring the differences of campus and community into the open and celebrates them rather than stifles them. With her introduction complete, the lights in the theatre dimmed and focused directly on the three people in chairs onstage.

Topics for the discussion were current and useful. Simon and Marks gave an overview of where the presidential race is today.

“Oh golly, it’s pretty close,” Mark Simon exclaimed when the topic was directed at him.

Other issues hit home for the students in the audience. When the draft was discussed, an issue that has many local and national male and female students concerned. “I don’t think it’s a real issue,” Marks said, a member of the Republican Party. Simon, on the other hand, said that, “neither [presidential candidate] knows that they’re talking about when it comes to the draft.”

The two men had different theories, and considering they both have a few years of political analysis under their belts. Simon has 30 years as a political writer for the San Francisco Chronicle, and Marks with over 25 years in politics. However, with so many rumors flying around, it’s difficult to know exactly what’s going on.

“How can you tell a politician is lying,” Simon asked jokingly. “If his lips are moving,” he finished, chuckling along with the sporadic laughter from tired students in the audience.

When asked what four more years of this administration would look like, Marks voiced his concern. “I think we’re headed into an era of one-term presidencies,” he said. He explained further that every president has a plan when they enter office, but new things happen every day. Some of these things can throw off the plan of the president, for example, 9/11. If Bush was elected again, Marks went on to say, he would be using his four years to achieve a legacy. Each president has at least one thing they’re remembered for, and as of yet, Bush’s is the war on Iraq. If elected for another four years, Bush would attempt to be remembered in a more positive way.

After the show, Simon said, “I’m very proud to be a Skyline graduate. I wouldn’t have missed this one.”

The overall message for the students of Skyline was simple, but powerful-Vote.

“Show up. Show up to the polls,” exclaimed Mark Simon. “There’s no excuse for not showing up.”

“It’s really up to people, particularly younger people, to start taking this seriously,” Bob Marks added. “This election is a great opportunity.”