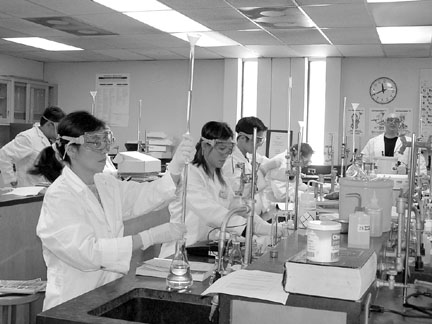 Mars and mouthwash. Pollution and pets. What do they all have in common? They are the inspiration for some of the scientific research projects done by Skyline biology students that were chosen to present their work at a national science conference in Texas.

Nine students from Dr. Christine Case’s spring 2004 Biology 230 class were chosen to show their original research projects at the annual conference put on by the Society for Advancement of Chicanos and Native Americans in Science (SACNAS), held this year in the city of Austin on Oct. 22 and 23.

“The SACNAS conference is huge; thousands of students attend,” said Tiffany Reardon, director of Skyline’s Mathematics, Engineering, Science, and Achievement program (MESA). “The fact that our students are going and thinking about graduate school is wonderful, but, even better is that they’re actually presenting alongside people from major four-year universities.”

The 2004 SACNAS conference is the third at which Skyline College students have presented. Other schools presenting work alongside Skyline included the University of California, various Ivy League schools, and other prominent universities and graduate schools from around the United States. The students representing Skyline this year are Jacklyn Cheng, Jennifer Frankot, Philina Mui, Kimberly Richardson-Kubitsky, Elena Robles, Sasha Rose, Anna Sverchkova, Amber Thet and Tresca Truong.

The research of all the students in attendance will be published by SACNAS after the conference.

Case said that Skyline was the only community college in the nation in attendance at the 2002 and 2003 SACNAS conferences. At press time, that appeared to be the case for the 2004 conference as well.

According to Reardon, community college students’ attendance at SACNAS is “a great achievement.”

“It motivated me a little bit more,” she said. “You see people your age that are doing so well.”

In order to be eligible for presentation, the students’ projects had to go through a comprehensive selection process. The projects started out as original research that the students chose to present in class. At the end of the spring semester, Case chose the projects that stood out to her as the best in the class. The students then further developed and refined their research over the summer. Finally, the projects were sent to be reviewed by scientists appointed by SACNAS who officially approved them for presentation.

One of the student projects, entitled “Reproduction of Earth’s Microorganisms in a Martian Environment,” was based on an idea suggested by the National Aeronautics and Space Administration (NASA). Interested in the possible existence of microbes on Mars, NASA contacted Case, who then passed along the idea to her class.

“We’re the group that decided to take it on,” said second-year biotechnology major Kimberly Richardson-Kubitsky. She worked on the project with Fernando Shahijanian, who was not able to attend the conference. She decided to present their research on her own in Austin but did not seem very stressed.

“It’ll be fine,” Richardson-Kubitsky said before the conference. “I’m not too concerned about it.”

Biotechnology student Amber Thet, who studied the microbe-killing effects of chemicals found in mouthwash, said she had never attended a large science conference, but was looking forward to it.

“This is my first time, so I’m really excited…and so nervous,” Thet said, taking a break from studying.

“Quite frankly, we are really lucky to have someone like Chris Case who is investing her time in these students,” Reardon said. “It is one thing to encourage the students, but it’s another thing to spend so much time working with them on their research.”

The biology professor was more than happy to volunteer her time in order to help the students get ahead.

“Science has always been a strong suit at Skyline,” Case said. “Going into science having a publication is very significant. It shows that you can produce. It shows you can work independently. It says you can follow through.”