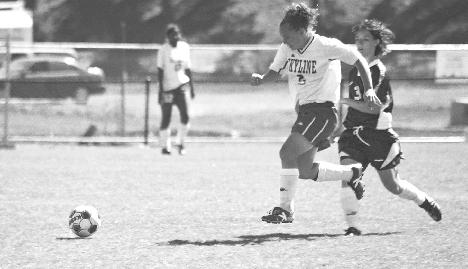 Skyline sophomore Deanna Prince streaks past an opponent from College of the Redwoods in their Sept. 7 match at Skyline. (Neill Herbert)

In the first match against Ohlone, the Lady Trojans fought hard, but they were shut out 2-0. Ohlone’s first point came on an own goal when a Trojan defender inadvertently knocked the ball past Skyline goalkeeper Rocio Samayoa.

Skyline answered back with two great shots by Felina Sosa that went in the back of the net, but they were nullified as she was called offsides both times. Then, in the second half, two long, hard shots by Sosa and fellow sophomore Susanna Chase ricocheted off the crossbar, narrowly missing a pair of points.

“Those were our four best scoring opportunities,” said Head Coach Kevin Corsiglia. “It’s a shame one of them didn’t go in.”

After Ohlone scored their second point in the second half, Samayoa was replaced in goal by Deanna Prince. The goal-keeping sophomore was bothered by a sprained finger, an old injury that she has been dealing with for several weeks.

Not only bothered by injuries but also physical fitness issues, the team appeared worn out early on.

“Fitness is definitely a factor for us right now,” said Corsiglia after the game. “A lot of the girls have just come back from injuries and haven’t played for a year or so, so we work on that as much as we can.”

Corsiglia also noted, “With all the construction going on, we only have one field and we share it with the men’s team.” As a result, the team has not been able to practice defending against long passes, a situation in which they showed some weakness during the Ohlone game.

In the match versus College of the Redwoods, Skyline showed improvement. The Lady Trojans dominated the Corsairs, winning by a score of 5-1. Playing as a more cohesive team, Skyline was able to score their five goals using five different players, including Chase, Sosa, and freshmen Jackie Heckenberg, Bridget Winans and Ally Tobar.

The same sort of improvement was evident in the Sept. 9 game against Foothill College, in which Skyline pulled off a 5-0 shutout.

“We’re starting to learn how to play together,” said Coach Corsiglia. “We’re getting more fit.”

Skyline scored twice in the first half of the game with shots from freshmen Aurora David and Melissa Roach. In the second half, Skyline again capitalized on the Owls’ lack of tight defense with two goals off of corner kicks and one more well-placed shot by Chase.

Corsiglia was happy with the noticeable improvement, but he said there are still things to work on, including more fitness and better finishing. According to the coach, the training will be key to repeating the success that the team enjoyed last season.

“Last year, we won more games than all three years previous,” he said. “We want the other schools to realize that it wasn’t just a one-year thing.”

They will have their next chance to prove their point on Sept. 15 at Modesto Junior College.