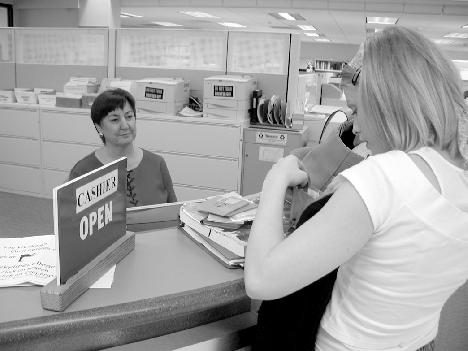 Skyline student Renee Ross digs deep into her coffers to pay for her classes. (Diana Diroy)

“It costs more money. It sucks. And you can quote me on that.”

California’s dire financial straits reared their ugly head yet again as students went to pay their registration fees at community colleges all across the state. As part of legislation proposed by Gov. Arnold Schwarzenegger in January, passed by the state legislator in July, and signed by the governor on Aug. 11, community college registration fees were increased from $18 per unit to $26 per unit.

“We anticipated it; we knew an increase was coming,” said Sherri Hancock, dean of enrollment services at Skyline College. “We were expecting it. We just didn’t know were it would end up.”

It ended up $8 higher than fees for the spring 2004 semester, a 44 percent upsurge. Overall, California community college fees have more than doubled since the spring 2003 semester. The sudden increase has been a cause of concern for some state education officials.

“The biggest concern is how steep it is,” said California Community Colleges Vice Chancellor Robert Turnage.

Turnage represented the state’s community colleges in his testimony before the state legislator during the period the bill that included the fee hike was being discussed. Despite the fact that the legislation was fought on different fronts by the Chancellor’s Office, various colleges’ student governments, and large crowds of staff and students at the capitol last March, Turnage noted, “It was very hard to stop.”

The vice chancellor was also concerned that raising the fees would cause a decline in enrollment and course offerings. According to Hancock, though, Skyline has not exactly suffered such a fate.

“Our enrollment is right where it normally is, so we haven’t had any reduction in that,” Hancock said.

During the first week of classes, she maintained a positive outlook on the situation, commenting, “We’ve had a really smooth registration.”

Hancock was also happy with the prompt reaction of the enrollment services to the brand new increase. She said that within two days of Schwarzenegger’s approval of the fee increase legislation, invoices updated with the new rates were mailed to all prospective Skyline students.

Inevitably, however, the speediness of the invoice printer and the postal service could not keep some students from feeling left out cold. Some learned of the increase even as they were preparing to pay at the cashier’s desk.

“Some claim they didn’t know, but all students were mailed a statement with an explanation and a balance, explaining why the fees were increased,” said a cashier. “Some say, ‘I’ll have to pay it later.'”

Several students did find themselves playing catch-up after the increase. Marcus Wong was one such student who used Websmart to register.

“I paid before when it was $18, and then a week later, it went to $26,” Wong said. “I thought they were trying to pull something on me. Now all your money is more focused on school. You try to get longer hours at work or whatever you can.”

Integrating work and school schedules is one balancing act that has gotten more difficult for many students because of the greater demand that the fee hike put on their bank accounts.

“I didn’t know how much it was going to increase, but I knew that they were going to increase it again,” said Amy Nadelman, a full-time Skyline student. “Now I have to work full time to pay for classes.”

The raised fees have also prompted some students to be more wise about their money. Besides having to live with a tighter budget, some have been inspired to be more diligent in school.

“$26-that’s a lot of money, especially per unit,” observed Thomas Miller, another Skyline student. “If people take classes, they’ll really finish them. At $26 per unit, I’m going to finish all my classes!”