The Skyline View • May 17, 2012 • https://www.theskylineview.com/the-focal-point/features/arts/2012/05/17/joss-whedon-and-super-cast-saves-the-avengers-moviebr/ 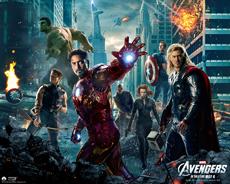 Since I was a child, I always loved the Avengers, a team of superheroes from around the Marvel universe who transcended their differences to fight off world-threatening evil. They were of many races, genders and creeds, but they always united and smashed down the villain. This past weekend, the long-awaited Avengers movie was released, and it was everything you hoped it would be.

There are a lot of things I enjoyed about the movie. First off, the acting just felt right; everyone seemed natural for the role they were portraying, and it gave it a true-to-comic feeling. A good example was when Tony Stark, a.k.a. Iron Man, doubted the intentions of Nick Fury (played by Samuel L. Jackson) and mistrusted him, but Captain America was willing to play the good soldier role and follow orders without question. These differences in their stances felt just like it did in the comics: Stark’s smartass banter, Cap’s poster-boy attitude and even Thor’s arrogant god persona were all done perfectly.

My favorite character though had to be Loki, played by Tom Hiddleston. Not only did he look like they took him straight from the comic, but the acting was magnificent. Acting like an unabashedly arrogant god with a small lack of conviction yet at the same time full of almost teenage-like angst wasn’t easy, but he did damn well. He played the cunning trickster so well that from now on, whenever I see Hiddleston in a movie, he will be Loki to me.

While lots of the greatness can be attributed to the actors and their seemingly dedication to the character’s personas the person who should get 85 percent of the credit is director/writer Joss Whedon. His knack for witty writing is very evident in The Avengers but it’s not so overdone that it seems pretentious. His flair for jokes and pop culture references is there but it won’t take away from the film.

What got me the most excited about seeing “The Avengers” is nothing tangible and something only sort of visible: It was my inner (and outer) geek having an almost nerd-gasm. Seeing Thor, Cap, Hulk or Iron Man do something amazing by themselves made me feel like an excited child in the best of ways. Then seeing them fight the enemy together to take down enemies put me on a whole new level.

Whether it was Hulk and Thor smashing down a giant space monster or Captain America and Iron Man combining their abilities to shoot out an angled laser beam at a dozen enemies, the visual impact gave me an indescribable feeling. The closest that I could get would be to say that I was filled with the rainbows and happiness of childhood coupled with the giddiness of a nerd seeing one of his dreams come to life.

What made this possible was that the action was really well done. Some movies, like “The Hunger Games,” have a camera problem, in which any time action starts to happen, the camera starts taking on this frenetic shake. I guess this is done to make you feel like you’re in the action, but it just hurts everything. In “The Avengers,” the camera doesn’t do this. While the action is intense and exciting, it’s very easy to follow, and you shouldn’t get a headache.

The only sort of downside for me was, strangely enough, the fans. I understand being excited about the movie; it’s a monumental event. But both times I saw “The Avengers,” there were people yelling, cheering and clapping. It crossed a point from fan excitement over to “Shut up! I want to watch and hear the movie.”

For a film that goes on for two-and-a-half hours, you won’t even feel it. With the great banter between the actors and nearly constant action, you should be riveted to the screen. I suggest seeing it in theaters, where you’ll be in for an exciting experience.