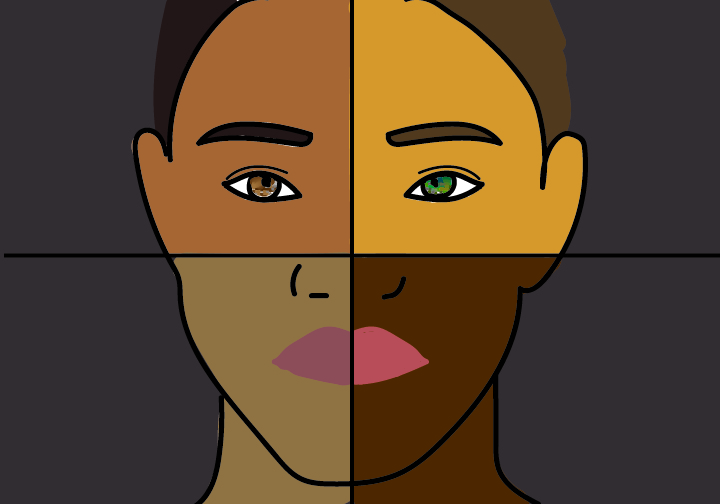 It starts with a few glances, then would turn into a stare — scanning one’s appearance from head to toe. People would approach them with self assuredness that they are a certain ethnicity. When finding out that they are wrong they give them the benefit of the doubt. First impressions do last for those who identify as multiracial.

“I am Indonesian, Samonan, and Filipino. Everyone takes one look at you and bases your identity on your appearance,” said Clara Jones, a student from the College of San Mateo. “My culture is a big part of who I am. I live in an Asian-based community with a lot of Filipinos and always get mistaken for Filipina. If you look like every other person, you are like any other person.”

From cross-cultural names and communities, many students deal with identity issues finding it hard to find their place. In a society where ethnic communities form and create cliques, it causes many to feel out of place.

“I would say I’m Indonesian, but people would think I was Indian, which are two different things,” Jones said. “I would be called Indiana Jones, making it hard for me to be included as they made me believe that I wasn’t Asian enough.”

Along with the discomfort of making friends at school, rifts with family members can be formed. Not being able to communicate with family makes students like Jones feel like there are certain standards to reach to identify as Samoan or other ethnicities.
“My aunt acts distant towards me because I’m different in her eyes, like the fact that I don’t speak the same language,” Jones said. “I feel like they don’t consider me part of the family ethic race.”

Being excluded from family outings for being mixed has never been a problem for Ava Chavez Houwer, a student at Skyline College. However, she has felt like an outsider in public settings with her Hispanic friends when they would play reggaeton at parties.

“I didn’t know the lyrics because I never learned Spanish. As they were all singing, I felt awkward or different,” said Houwer. “Even though there are times of discomfort, I feel more connected to Hispanic culture.”

Houwer has Australian,Latin and Filipino ancestries. She finds it easier to just say she’s Latina at times since it’s hard to explain how she’s mixed with Filipino. Just like Jones, language barriers have been built due to not being taught native languages at a young age. To make up for it, both make friends with people in their community in hopes that they get influenced.

“I have had a Hot Cheeto-girl phase that helped lessen the difference between me and my Latino friends,” Houwer said. “After that phase, I felt like there were different parts of my identity pulling me apart causing me to go through a self-discovery journey.”

Houwer said that finding herself can be frustrating when there are multiple communities you get associated with. Being exposed to different cultures, she learned that there is a wider spectrum of identity struggles within ethnicities.

“I wish there were more cultural practices learned by my parents so they could’ve been passed down to me, then my children and so on,” said Skyline student Alana Patel, whose parents are Filipino and Indian. “Both my parents are very Americanized and not super cultured.”

There has been a pattern among the featured multiracial students that they may have a dominant connection with one culture, which may distance them from their other roots.

“I’ve developed a curiosity towards my Indian culture,” Patel said. “ I watch YouTube videos in my grandfather’s language, Gujarati. I’d listen to phrases and pronunciation.”

Food has made Patel’s connection to Filipino culture stronger even though she doesn’t speak Tagalog. Nevertheless, this hasn’t stopped her from appreciating Indian culture.

“My grandpa celebrates Diwali, a type of festival in Indian culture. I used to go when I was younger, but now I would be interested in going again,” said Patel. “I stopped going after attending middle school and (due to) lack of time.”

Social media has become a tool to find a balance of representation of their identities. Posting on social media food, outfits, or dances allows Jones, Patel and Houwer to embrace their culture.

“It’s helped me see different perspectives on what it means to be mixed,” said Houwer. “I have learned that it’s about developing who you are and not creating a persona.”