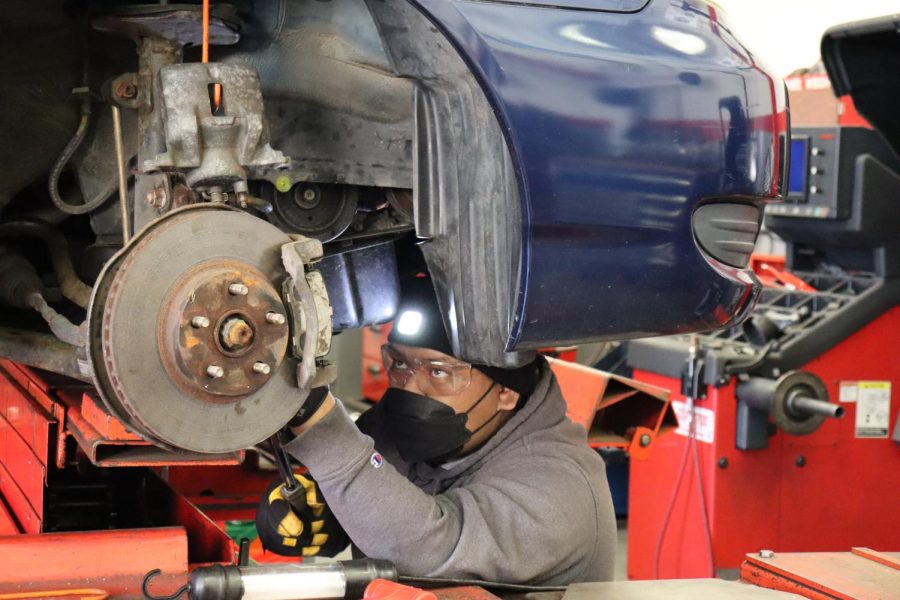 Julius Mangabat prepares the automobile in order to install the tires.

Auto shops may appear intimidating, with the crew consisting of rough and tough “grease monkeys” and a great number of brand-named vehicles all lined up within the shop. Some may even say auto shops are dull and unwelcoming to many, but these workshops radiate with creativity and innovation.

Whether it be a hobby, passion, or a bit of both, the world of automotive technology provides something enjoyable for all technicians. For many auto mechanics, especially those at Skyline, modifying and refurbishing electronic and manufacturing units not only brings them joy but also motivation.

“Personally, I prefer modified vehicles,” said Liam Kerr, a Skyline student in his second semester with the automotive program. “I really like the underground car scene and the way that everything works. You can basically build your own car and whatever you want.”

Though his interests lie with modifications, Kerr is motivated to become a mechanical engineer beyond customizing cars.

“Hopefully, one day, I can have my own shop or work at a shop like that so I can help people’s visions become a reality and make the cars that way,” Kerr said.

Similarly, Skyline’s automotive professor, Julia Johnson, takes great pride in the curriculum she teaches, such as auto tech fundamentals or engine diagnosis, and she treasures seeing her students succeed in the auto industry.

“When I developed all my classes, I went to the employers and asked them what do (they) want me to teach,” Johnson said. “I visited the shops, saw what kind of equipment they used, their processes, how they do it, and teach the students exactly that.”

She strives to create a personal relationship with her students and give them the opportunity to experience auto shop work. She builds an available path one may take as a potential career, regardless of an individual’s knowledge or background in this industry.

“I am giving them the roots, and they are getting the foundation and education,” Johnson said. “And then it’s time for them to spread their wings and fly out, and be successful. That truly is the reason I am here.”

And while each mechanic’s voyage in search of passion for engines and modifications differ, benefits arise for those who put in the effort and expand their expertise.

Joseph Surick, a Skyline student enrolled in the automotive program, had been gripped by the clutches of a toxic family household majority of his life, leading him down a dark path of alcoholism, and eventually placing him in rehab where he decided to fix his life and pursue his passion in auto repair.

“I don’t want to live from paycheck to paycheck anymore,” Surick said. “I’d rather put in time and effort to get the credentials to have a good quality life. It takes a lot to start at age 35 to (restart) from zero, (but) I still have achieved a lot more than I ever thought I would.”

Surick preserved through sheer determination and hopes that his own personal journey would encourage those troubled or insecure in their abilities.

“The only thing that’s stopping (you) is procrastination and self-doubt,” Surick said. “I hate to borrow a slogan from Nike, but ‘Just Do It.’ Seriously, if I can do it, anyone can do it.”

Likewise, Johnson may have pursued her passion in the field late, yet she was able to overcome a slew of challenges in this male-dominated field of the auto tech world as a woman engineer.

“Being treated differently than the other guys and being treated less than … hasn’t been all roses,” Johnson said. “It has been an uphill climb.”

Despite the setbacks, her motive for teaching and love for the industry is what drives her to become a role model for students.

Automotive careers have generally been viewed as monotonous and flat. However, there is a fiery spirit that exists in the industry and lessons that go beyond cars and electronics.