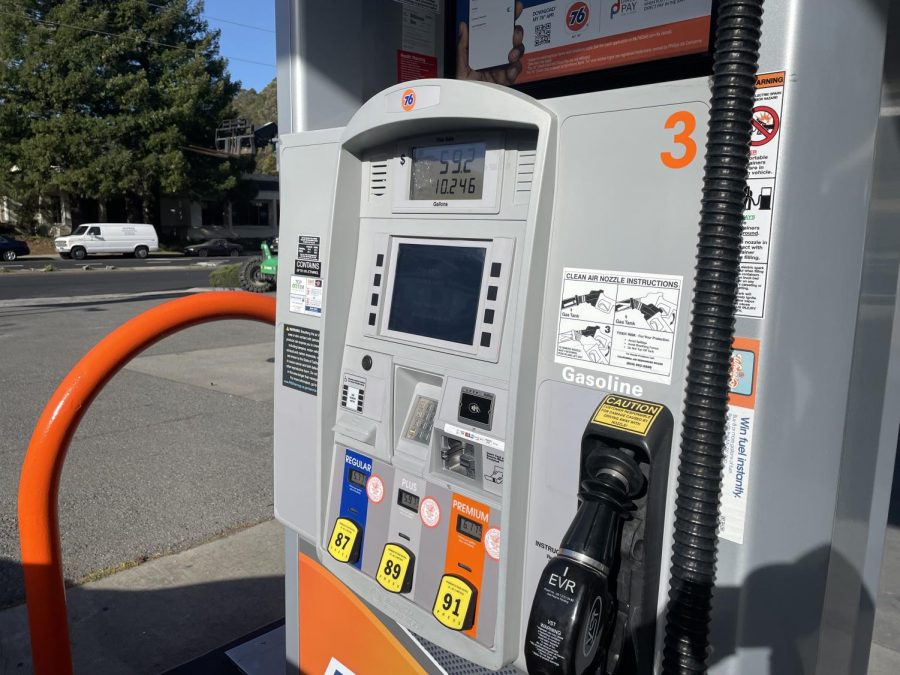 In most Bay Area communities, gas prices are upwards of $5.

An exasperated expression crossed Jayme Ng’s face as she glanced at the screen on the gas pump. The plain and expressionless digits popped tall and mighty — almost frightening — as they appeared before her.

“It sucks,” Ng said. “It does, but what are we gonna do? Why complain about something we all are experiencing. Sure, that gas bill hits a little harder, but I have to get gas in order to get to work, to make money and to feed my family.”

Ng inserted the nozzle and watched as her car figuratively drained her wallet at the local 76 station in Pacifica, the city she calls home. As she waited, she realized that Costco’s gas was roughly 60 cents cheaper, which caused her to abandon the in-progress fill-up. Ng’s experience is an example of the current climate when it comes to prices; the current system has transformed into an outline of the stock market.

Gas prices have seen a monumental increase since Russia invaded Ukraine on Feb. 24, leading to the highest rates in American history. There has been an even larger bump since the United States announced hefty economic sanctions against Russia and banned all imports of their oil. Along with the previously high inflation numbers, Americans are facing the consequences of the war overseas and are preparing to suffer at the gas pump as a result.

“Inflation is supply and demand,” said Kevin Nelson, an economics professor at Skyline College. “After World War II, the country had inflation for a period of years as U.S. production shifted from wartime supplies to peacetime supplies. As the supply chain ‘leveled out’ and ‘supply met demand,’ prices stabilized, and wages balanced out prices.”

These steep prices are expected to remain high for quite some time, possibly even through April. Until then, many drivers are unstrapping their seatbelts, opening the door and walking away from the thought of commuting long distances with their vehicles. As a result, finding ways to conserve money and fuel has become the number one priority.

Even though the outlook and public persona of gasless vehicles are undeveloped, it wouldn’t be a stretch to consider them the future of transportation. According to a study conducted by Electrek in mid-2021, cumulative plug-in electric vehicle sales had bypassed 2 million. California hopes to have 61% zero-emission vehicles by 2030.

“Maybe this cost will force people to go electric earlier than planned and reduce our dependence on oil,” said Kevin Kellogg, a Pacifica resident.

Kellogg says he recently purchased an electric vehicle and now finds his car payments slightly higher than what he would be paying for gas.

“I commute a lot so it’s not the same for all,” Kellogg said. “Main point is that sometimes good change only happens when forced.”

Tesla is easily the most recognizable brand in the electric car market; they sold more than 900,000 cars in 2021. Although the amount may be substantial, the market still struggles to appeal to American consumers who need to transition off oil the most. The average price for the cheapest Tesla stands at almost $45,000, far too out of reach for the population looking to avoid high gas prices.

“In the short run, it’s going to hurt,” Nelson said. “Economic fluctuations stimulate Americans to come up with better solutions to problems and adapt to the changes we felt we could ignore. Many Americans bought new gas-guzzling SUVs and now can’t afford to fill them up.”

As normalcy begins to reinstall, more Americans are working from the friendly confines of their home. The lack of time spent in a specific location heavily lowers the need for a car and eliminates any type of commute.

“Before the pandemic, working from home was rare,” Kellogg noted. “Now, it’s part of the future and balances the work and home dynamic for many. It never would have happened until companies were forced to change.”

Recent studies show that 77% of remote workers feel they are more productive with their jobs while at home. An even larger percentage of managers believe that this trend isn’t changing anytime soon, possibly even becoming the new norm,

The historic increase in gas, never before seen inflation numbers and the ongoing conflict between Russia and Ukraine are connected. How? Many Americans are trying to piece the answer together and have concerns about the future of the economic direction.

“I truly hate that people think the war and our gas prices are mutually exclusive and we can’t be upset about both,” said Chelsea Kapuniai, a Pacifica native. “Of course, the inflation we are dealing with is not anything compared to the war, but inflation is causing people to lose their homes, not be able to provide food for their families, limiting their capacity to obtain resources, not being able to pay bills, and more.”

The puzzle to figure out whom to blame has been a challenging task. Some Americans are certain President Joe Biden is responsible for the supply shortage. Meanwhile, Biden himself has traveled to great lengths to call out Russia’s President Vladimir Putin for the economic hardships in the U.S.

“A large contributor to inflation this month was an increase in gas and energy prices as markets reacted to Putin’s aggressive actions,” Biden said in a statement.

A large contributor to inflation this month was an increase in gas and energy prices as markets reacted to Putin’s aggressive actions.

I know that higher prices impact a family’s budget, which is why I am fighting to bring down the everyday prices that are squeezing Americans.

According to a recent Reuters poll, three in five Americans are willing to pay more for gasoline to continue to support Ukraine as they try to prohibit Russia from further invading their democracy. The survey also uncovered a large majority of 80% supports stopping oil and gas purchases from Russia.

Even though the disgusted facial expressions will continue on full display at the gas pumps, the working people in the United States are focused on developing strategies and techniques designed to limit the amount they spend. And if that means showing solidarity for a struggling country, they’re all in.

“I know more people are getting hit harder than I am with gas bills and in life in general,” Ng said. “I think doing what I can to cut corners like clustering errands, carpooling, public transportation and pre-planning trips out is helpful.”