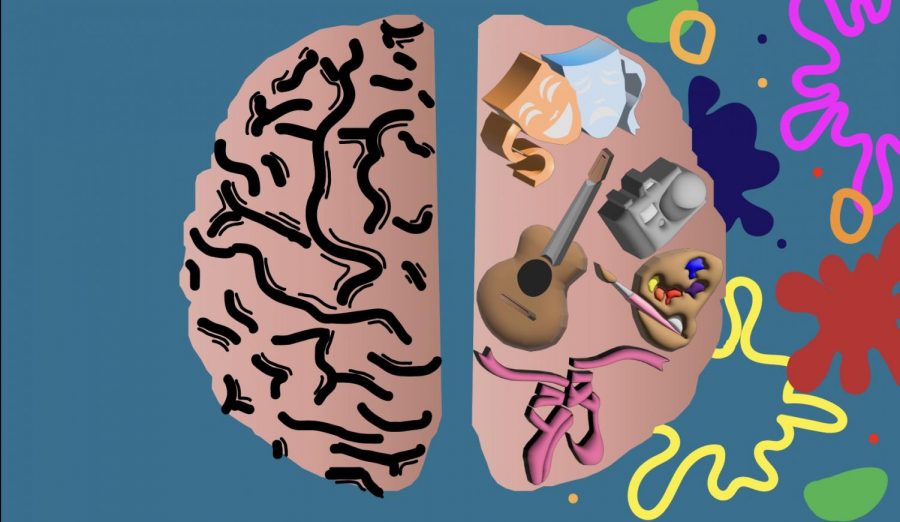 Creative people are thought to utilize the right side of their brain at a relativley higher rate.

“This flair, fire, and passion of musical theater. I wanted to do it for a living,” said Megan Bueno, a third-year student at the College of San Mateo. “I was doing all this research seeing how competitive musical theater is and I just had these doubts in myself.”

Bueno isn’t alone amongst the many students who doubt their passion due to the fear of not making it into a living or getting a stable job. Many students struggle with this fear when transitioning into college and are deciding on a major. Around 80 percent of students starting college change their major at least once, according to the National Center for Education Statistics.

Many students find themselves under pressure when it comes to deciding a major by family or friends, especially those interested in the creative arts, dance, and social studies division.

“I’ve definitely had my doubts, which is why I switched to sociology because that’s also been my other passion,” Bueno said. “It was stigmatized by my family at least because I’m Filipino. They said that I should’ve gone into the medical field and become a nurse. It was a rough time since I didn’t really know what I was doing.”

Bueno’s family was supportive of her decisions but because of the background that they come from as immigrant parents they just wanted to make sure she was able to support herself.

“In the end, it’s my decision and it doesn’t affect them because it’s what I want to do,” Bueno said. “I want to get my master’s degree so I need to wonder who’s doing the work, so they have to deal with it.”

Besides families and friends being a part of that outside noise when deciding on a major, sometimes students get in their own heads.

Canceling out the Noise

Kenny Gonzalez, a career counselor at Skyline College, went through a similar stage like Bueno where feelings of doubt rose.

“I think the only person that got in the way for me was probably me,” Gonzalez said. “I had lots of different interests and had a difficult time figuring out what I wanted to do.”

He was able to tune out the noise and stereotype that you need to fit into a particular box. Now he teaches students to do the same and guides them to a clear direct path.

“Many careers that are heavy on math, science or technology don’t feel like a right fit but forced,” Gonzalez said. “We tend to put ourselves in these cookie-cutter approaches. In the creative arts, there are no traditional pathways. You create your own, almost like a freelancer, to be able to do the kinds of things you want to do, not what your parents want you to do. Not what your partner wants. Not what obedient society is telling you is safe.”

Many students worry over how they will get a job due to competitive majors. But there isn’t just one option to one’s passions. Many different directions can be taken and lead you to more options.

“I think that in sports, not everybody’s going to play in a major league,” said Amber Steele, a dance professor at Skyline. ”But people who are really into sports and who play in college do other sports-related jobs like athletic training or teaching. Maybe [they could] teach university or private leagues. [They could pursue] marketing for a sports team or run the facilities building, management, or any of those supporting parts of the sports business. The same is true for dance.”

Steele graduated from UC Berkeley with double majors in Nursing and Dance, for fun. She had an interest in teaching English, but after graduating she decided to teach dance.

“Many students come to community college and they’re like ‘I’ve kind of done this as a hobby,’” Steele said. “‘I think I’m going to be ––– insert a generic thing that your parents told you to do when you grow up.’ Because I have personal experience trying things out in community college, I didn’t consider arts as a viable career option.”

She is now grateful and well supported. She believes that her career path is very much viable and it would have never occurred to her until she had gone to community college where people encouraged her to try it out. Now, Steel is paying it forward.

“It’s just a lack of understanding of what’s out there,” Gonzalez said .”So many people are comfortable in their own environment. They don’t realize if they open up the door, there’s an entire world. We get fixated on what we can see and what we’re comfortable with. It’s not that you can’t make a really good living with a creative career. It’s just that you’re not seeing beyond.”

Students interested in the creative art, dance, or social studies division are possibly stuck or lost. Stuck being in the state of not moving, contemplating, or trying to figure things out. When being lost you are trying things out with no specific direction.

“Oftentimes, students that are interested in the creative arts are stuck because they don’t know what’s out there,” Gonzalez said. “There has to be a mind shift where you have to be biased towards curiosity and begin to explore and get lost.”

Testaments to success in creative fields

There are many testimonies of people being able to make a living out of a passion. The fear of not being able to make it comes from the noise around us. By canceling out the noise and becoming clear-minded only then you can start to look into opportunities that will allow you to live off a job based on your passion and not just for the money.

Fiona O’Neill, a Skyline alumni, is a testimony that it is possible to live off a passion. She teaches dance classes while also using her other hobbies as skills.

“I’ve been teaching for six or seven years,” O’Neill said. “I’m also currently in a musical in Foster City, and I’m doing the wigs and makeup for that show.”

Consistency was key when O’Neill began her journey in her career. Her hobbies that she worked on to perfect over the years have paid off and have mashed themselves together into her job now.

“You need to put in as much time as you can into your craft to perfect it to show people that you are worth their time,” O’Neill said “There’s so much opportunity to do anything that you want, you just need to push for it and know that you’re capable of doing what you know you can do.”