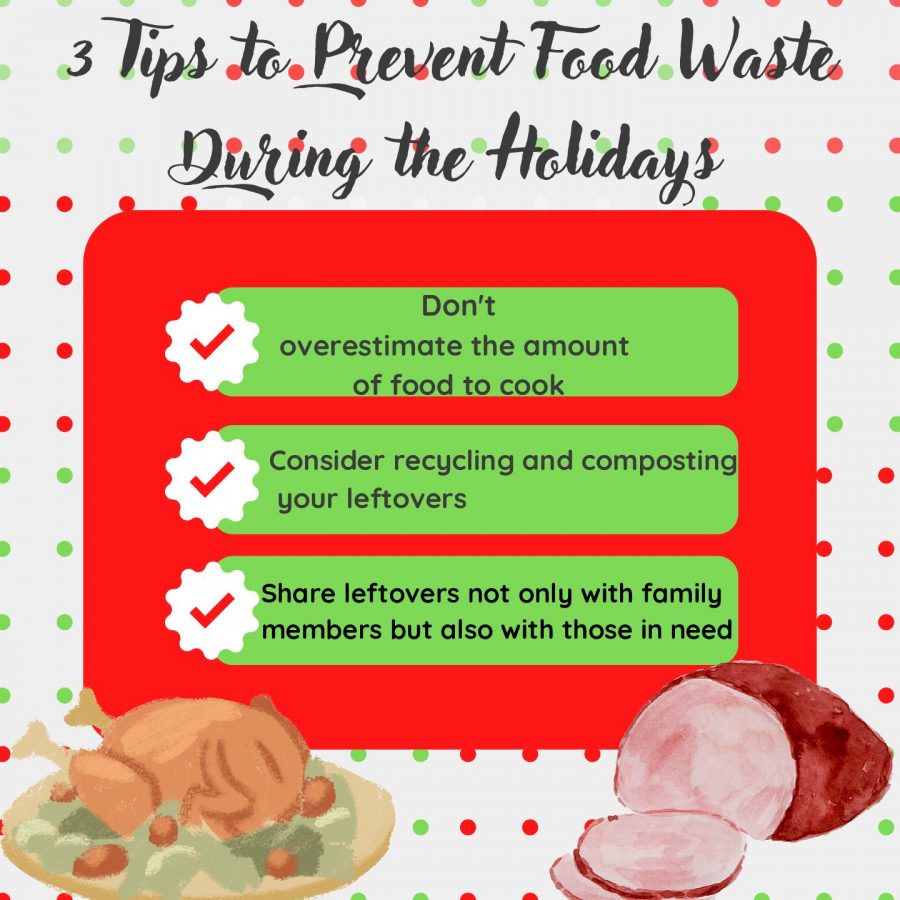 Certain measures can be taken to prevent holiday waste.

Every holiday season, Americans fill their stomachs with delicious turkey, ham, stuffing, sweet potatoes, and more. But when the holidays are over, much of the food goes to waste.

According to The United States Department of Agriculture’s website, Americans waste around 30-40% of the food supply, but that amount rises to 25% during the holidays — Thanksgiving, Christmas, and New Year’s. The two major factors that contribute to food waste are supermarkets and uneaten leftovers.

During the holiday season, Americans cook up a big feast not just for their immediate family, but also for their extended families. That adds up to just enough food for a week of dinners and lunches. Of course, too much of something can get tiring. This leaves families feeling tired of the same old meal, causing them to throw the food out.

This habit of wasting food has caused some families to change what they do with their leftovers.

“I have realized that wasting food has become way too common, which has caused me to educate my family on not to waste food and use alternatives,” said Maya Martinez, a student at the College of San Mateo. “I told my mother for Thanksgiving and Christmas we could make sure we cook not too much food and give the left overs to our guests. My mother loves to make sure my extended family is satisfied and full but none of them take leftovers home, leaving my immediate family to eat all of it. Having to eat the same meal for almost two weeks is exhausting.”

Another student shared about how her family has been consistently strict on not wasting food during the holidays while also helping the less fortunate.

“Every year my mother and I make tamales for the holidays,” said Guadalupe de la Cruz, a student at Skyline College. “We make a bunch for my family, and whatever is leftover, we put it off to the side. Afterward, we gather them all up and give them out to our local food bank. We also have realized a rise in homelessness on our block and at times give some of the tamales to them … We just want to make sure our food does not go to waste because it is not a good feeling, knowing that food that could have been eaten by someone who was probably starving for days could have eaten it.”

As much as we can try to make sure we do our own part at home to prevent food waste, there is one that is not in our control.

According to The Guardian, supermarkets are at fault for 10% of food waste yearly, but during the holidays that percentage rises. When food is close to expiring, the supermarket decides to throw the food out instead of cooking it or giving it out to the homeless. The reasoning being is due to possible lawsuits in the event of a customer getting food poisoning.

“I am one of the night crew members at Trader Joe’s, and I haven’t seen any food wasted at all especially during the holidays,” said Alex Keinah, a grocery store employee. “The only time food is ever wasted is if there’s mold. We care about our customers and we’re known for giving back to the community. We have this thing called “shares” and this is where we distribute food to our local communities who aren’t able to afford food for the holidays.”

While we can hope that other supermarket chains can follow Trader Joe’s footsteps and help reduce the food waste rate, we can also do our part and start reducing food waste at home.