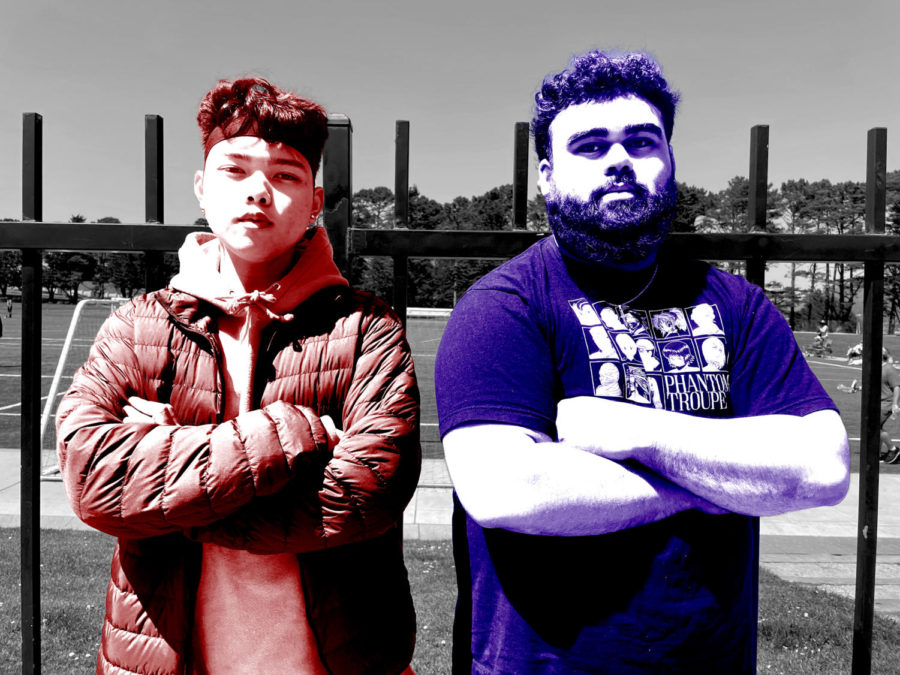 Friends Sheane Base (left) and Mark Estrada (right) are few of the many students who decided to change their majors and career goals because of the pandemic.

Freshman Sheane Base dreams of being a licensed pilot after college. The COVID-19 pandemic, however, derailed his vision of transferring to an aviation school.
The cost of enrolling in an aviation school is “freakin’ expensive”, according to him. Given the circumstances, he, with careful consideration, pulled out his plan B — changing his major to business.
“Just looking at it, I’m just like, ‘I can’t handle this in a situation like this,’” Base said, recalling a time when he reflected on how he has personally been affected by the pandemic. “I’m not going to be able to save up enough money for that specific tuition.”
Base graduated from high school last year and subsequently began attending Skyline. On the other hand, Mark Estrada is a Skyline alumnus who earned an associate’s degree in psychology at the college and transferred to San Francisco State University. Initially, he had declared psychology to be his major there, but changed it to Asian American Studies after two months of studying at the university.
“I always thought I could handle psychology, especially because I want to be a counselor someday,” Estrada said. “And I thought that’d be the common route to take, but I realized you don’t need a specific bachelor’s degree to go into the counseling program.”
Base and Estrada are among the many individuals who, under the circumstances imposed by the COVID-19 pandemic, have decided to change their majors and career goals. According to them, the economic backlash and the transition to remote learning were the primary factors that motivated them to consider options they may not have otherwise.

According to the latest US Bureau of Labor Statistics (BLS) civilian unemployment rate, the country at one point experienced a 14.8% unemployment rate, which corresponds to the loss of 18 million jobs during that time, when the recession was at its peak in April 2020.
Estrada said that with the schools shutting down, he was laid off from his job as a teacher’s aide, and was told to apply for unemployment benefits for the meantime. He said that he has been accessing resources that are available to him as a student.
“These are the resources that are required and that should be provided for everybody,” Estrada said, recalling how the remote learning situation has been especially difficult for those who don’t have their own desktop or internet connection. “I was very fortunate — I was able to get a computer set up with my financial aid money last semester.”
Base, on the other hand, said that he found another job that is more related to his major. For him, however, finding a better job is not a permanent solution. 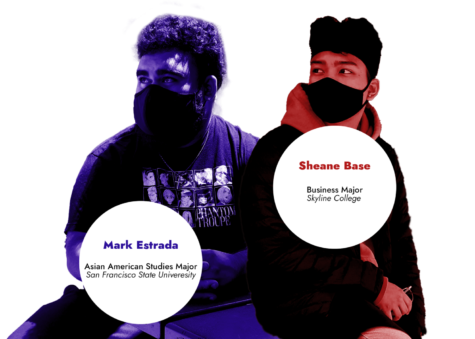 “That just means more saving, because we don’t know when this pandemic is gonna end,” Base said. “I mean so far, I think we could see the light at the end of the tunnel, but at the same time, this is the beginning of it. The tunnel is kind of long, and you just need now we have to budget everything.”
Base admitted that his family “didn’t like” the idea of him changing his major from aviation to business. Nevertheless, Base believes that a business major is ideal, especially with their experience with the current economic situation.
“If I do ever build up a business, in a situation like this — if it ever happens — then at least I know what to do,” Base said. “I’m not gonna struggle like how my parents struggled because of their business.”

For Estrada, the remote learning situation was another factor that contributed to his decision to change his major.
He said that he had a different experience learning psychology at Skyline College than he did learning it at San Francisco State University. He noted that this might be because of the differences between online and in-person learning.
“I was taking classes I thought I could handle, but it was just definitely a lot different being online rather than in person, seeing as how my previous psychology classes were in person,” Estrada said.
He also said that this semester of online learning “feels like a job”. While he has found that he has more control over his time and the pacing of what’s required of him, being involved with extracurriculars and having multiple meetings in one day means he has to manage his time diligently for himself, his family, and friends.
“It’s kind of sad,” Estrada said. “I had to buy a little whiteboard, put on my door, so I can let my parents know, like what I’ve scheduled for the day.”

Heads up: It’s okay to change your mind

Kenny Gonzalez started as a psychological services intern at the College of San Mateo in 1998. When he finished his master’s degree in marriage and family counseling and therapy the following year, he thought he would aim to become a therapist. However, he found his calling in counseling. He is now a career counselor at Skyline College.
With more than 20 years of experience working as a counselor across SMCCCD’s colleges, he can say with confidence that it’s “okay to change” the trajectory of your education and professional life.
“With age comes wisdom — You discover what your likes and dislikes are, and understanding what’s truly important starts with discovering your interests,” Gonzalez said. “They are the building blocks of your identity. These are the things that engage you and excite you.”
Gonzalez pointed out how the results of a 2019 national longitudinal survey by BLS that was conducted from 1979 to 2016 concluded that on average, a given person will be employed in 5.7 jobs from ages 18 to 24, 4.5 jobs from ages 25 to 34, 2.9 jobs from ages 35 to 44, and 1.9 jobs from ages 45 to 52.
Gonzalez explained how a given passion one has could present endless possibilities. For example, he said that someone who had loved playing with Legos when they were a child may become an architect, or perhaps use it as leverage to go into carpentry, engineering, rocket science, or even something more artistic like pottery.
Gonzalez imparted some wisdom that he had gained from his experience working in marriage and family therapy into designing four career counseling benchmarks that he uses to help students: self-discovery, career exploration, mindful deciding, and careful planning.

1. Self-Discovery
Gonzalez pointed out that some students “don’t fully know who they are” and succumb to external pressures (family, friends, clergy, media, society, etc.) that appear to “know what you would be best at.” Moreover, some people are also troubled by their internal voices that point out flaws, weaknesses, other people’s opinions, and whether or not they can even actually afford to go to school in the first place.
“They need to do some self-exploration to discover their skills, their interests, abilities, their values, and their personality traits,” Gonzalez said.
2. Career Exploration
According to Gonzalez, upon gaining the confidence and figuring out what gives you joy, it’s time to “build your herd.”
Gonzalez connects the students with “like-minded people,” specifically professionals in careers that students are interested in pursuing.
“I use LinkedIn as one of the vehicles by which to reach out and connect and use my connections to connect other students,” Gonzalez said. “So, they get a better perspective of the world of work beyond the walls of Skyline College, because it’s totally different outside than it is in the classroom.”
Gonzalez also explained that exploration is “critical,” especially as it does not mean that you are committing to anything, but are just gathering information.
3. Mindful Deciding
Gonzalez said that once a student has done three things: practice rigorous authenticity, let go of the outcome, and do the uncomfortable work, “you’re going to be presented with options.”
“It doesn’t matter what you choose,” Gonzalez said. “That’s all fantastic. And it’s okay to change because that’s the world of work today, where Millennials are changing jobs three to four times within a 10-year time span — They’re changing at a rapid pace.”
At this step, students could envision “which colleges and universities best align with career goals” and “how to best enter the workforce.”
4. Careful Planning
Gonzalez mentioned that data from the State of the Global Workplace report from Gallup, an organization analytics and advice firm, shows that “85% of the world’s employees are not engaged or are actively disengaged at work and therefore are not as motivated or productive”, and that only “15% are currently engaged at work — that is, psychologically invested in their job and motivated to be highly productive”.
Gonzalez said that he is focusing on that 15%, and connects students to that herd, so they can figure out who they are, and pursue that.
“You get to do this one time,” Gonzalez said. “And so, what you want to do is you want it to be a very pleasurable, memorable experience for you, because you got a chance to grow and understand so much about yourself during this time period. It shouldn’t be ‘I’m doing this to please my parents,’ or ‘I’m doing this because I think it’s a safe route,’, because all that’s going to do is kind of put you right into the 85%.”
Students then would complete a Comprehensive Student Education Plan (CSEP) with a Meta Major counselor.

“More than half of the jobs (that will exist) in the year 2030 don’t exist today, and I think COVID is probably going to turbocharge all of that, because things are going to be created and developed that are not here today,” Gonzales said, and provided how the advent of certain technologies such as Apple Watch and Zoom Video Communications was only released in 2015 and 2011 respectively.
When asked how he envisioned himself in the future with the major and career path they choose, Base said that he sees himself having his own business or helping his dad with his business.
“I chose this path, and I think I can make the best out of this situation,” Base said. “And that’s what I always try to do.”
Estrada, on the other hand, hopes to work in higher education institutions and with the community.
“I’m hoping to become a community college counselor, sort of on the academic counseling side, and just working a little more with the community as well outside of college, working with youth, like sports leagues,” Estrada said, and explained his desire to start his own learning community.
Base and Estrada also gave their sentiments with switching majors and careers.
Base said that it is not a “loss” to switch careers, and is just a way of learning. Estrada agrees and added that it does not mean you lose all your progress, especially as some courses could be applied to the next major you decide on.
“You’re not gonna want to get a major that you don’t enjoy or won’t have much of a future with … You’re literally investing in yourself, because that’s your education that’s being paid for,” Estrada said.
“I think just because (you’ve declared) a major doesn’t specifically mean you’re stuck with that major for the rest of your life,” Base said. “It’s always good to experiment with some other things — You might discover something new out of it. At the same time, in our generation today, you need a lot of experience and everything.”