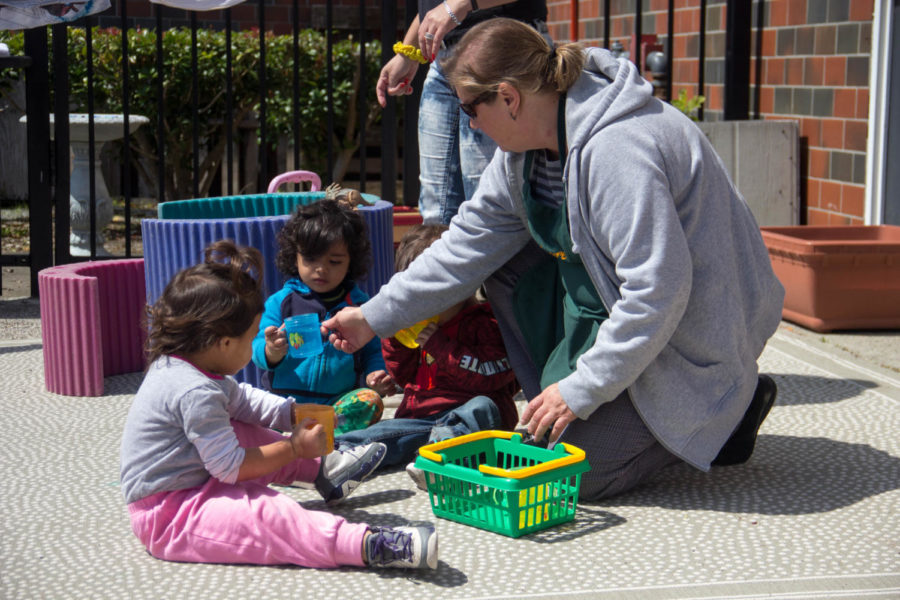 Toddlers playing with a Loma Chica staff way back in 2016.

Professor Sarita Santos will never forget how angry she was when a friend tried to dissuade her from pursuing a career in child psychology and special education.
“‘Rita, you’re so smart,’” Santos said, recounting what that friend said to her. “‘Why are you majoring in psychology and now you’re going to go get your PhD in special education, and babysitting retards?’ — quote, unquote.”
For a long time now, professionals in the field of early childhood education (ECE) have been doing their best to dispel misconceptions and misrepresentations of the discipline. The consensus of several districts’ professors is that early childhood education has long been “disrespected”, and has been reduced to the ideas of “babysitting” and “women’s work.”
Santos also described how colleagues from different departments from Cañada College themselves do not acknowledge the discipline as one that falls under the social sciences.
“There was pushback from some faculty with psychology folks and staff who said, ‘Early childhood does not belong in social science,’” Santos said. “And I said to them, ‘Look, my background’s in psychology too, so I know you’re what you’re thinking, but this is the thing I do in my classes: We talk about a typical development, we talk about the neurology of someone with autism, we talk about left brain hemispheric functions for someone with dyslexia…”

“It feels like a fight, sometimes, to have to defend what our students do for a living and what they’re interested in,” she added.

What is ECE exactly?
“The Early Childhood Education pathway at the colleges prepares students to go into the work of caring for and educating children from birth to eight years old,” said Professor Patty Hall, chairperson for the education and human development program at Cañada College.
She explained that courses from the program can be applicable not only for teaching, but also in psychology, and even in sports like kinesiology.
“There are many, many, many directions in which our students go,” she said.
Professor Kristina Brower is a proud ECE alumna from Cañada College, and the current program services coordinator of the same program for Skyline College. She mentioned that the program also prepares students for specific certifications and permits before they’re certified as a program director, which then qualifies them to run a program.
“Early childhood education is really about learning about children and families, and what is best for them,” Brower said, explaining that children tend to have difficulties with development in environments that expose them to a lot of stress or trauma and don’t allow them to get the right support from an early age.

It’s scientific
According to Hall, the practicum classes, which are culminating activities that require students to accumulate an ample amount of time getting hands-on experience, have only recently become a requirement for early childhood teachers.
“Before that, we were graduating early childhood teachers without even that,” Hall said. “So, we are doggedly committed to bring back the real practicum class as soon as the county will open up the programs.”
Professor Tina Watts, who is the childcare development center coordinator, explained the significance of the Child Development Laboratory Center (CDLC, commonly known as the Loma Chica building) at Skyline College.
“We certainly want to provide childcare services for student families while they’re taking classes, or while they need to study or even work, but we’re also the lab school for the education Child Development Department,” Watts said.

Master teachers at Loma Chica guide students to integrate practices for them. As a laboratory, ECE students are sometimes tasked to observe children from a one-way mirror and hypothesize developments taking place.
Cañada College had its own Child Study Center from 1998 to 2002. The college’s ECE program utilizes the Mary Meta Lazarus Child Development Center at the College of San Mateo for practicum and other hands-on activities. Hall explained that the department has been requesting the facility in their program reviews, but she admitted that it’s not that easy.
“Because of the recession, because of financial setbacks, they were never able to open the program as a child development center,” Hall said. “They’re very important to child development programs, but they are a big investment.”

A career that is underpaid
Professor Nicole Porter of Skyline College’s ECE department mentioned the concerning pay disparity for the careers out there for ECE majors, which causes students to leave the field in search of a better-paying job, “because they can’t make a living wage.”
According to the US Bureau of Labor and Statistics, the 2020 median pay for childcare workers is only $25,460 a year, or $12.24 an hour, while the 2020 median pay for preschool teachers $31,930 a year, or $15.35 an hour.
“Sometimes, at the teacher level, if you’re coming in and making $15 an hour, and you’re the only person in your household who’s working, and you’re taking care of other people, we know good and well that if you’re a family of four in San Francisco, there’s no way that you can make it above the poverty line,” Porter said.
An article published from Investopedia indicates that it takes at least $60,000 per year to meet basic expenses each month in the Bay Area.
The Center for Study of Childcare Employment (CSSCE) from the University of California, Berkeley released a 2020 report calling for the improvement of state policies to better serve early childhood education jobs, as educators “consistently endure poor pay and inadequate working conditions.” Moreover, the report indicates that ECE is said to have “never been adequately funded” by the federal government, and that federal rules “often drive decisions at the state level.”

A “gendered” discipline
The early childhood educators voiced their concerns about the lack of male representation in the field. Each of them gave their own explanation for this phenomenon.
Santos gave two possible explanations as to why men tend to not want to be in the said field: salary and concerns about how the public views men who work with children.
“Men are socialized to bring in the bucks, right?” Santos said. “How are you going to support yourself, let alone a family on minimum wage?”
She explained that men are dissuaded to be in this field due to how difficult it is to support oneself or their family with the wages jobs within it tend to offer. Additionally, while Santos asserts that concerns about pedophilia among the both sexes are legitimate, the fact that male teachers aren’t allowed to change diapers, let alone hug children, poses “societal concerns”.
Hall agrees that salary is a factor when it comes to men entering the field, describing it as a problem of equality.
“It’s not that men aren’t interested in doing the work — It’s that men aren’t going to go take the job at slave labor wages,” she said. “Men won’t do it. So until we have a really equal workplace, in which the employees are getting a living wage and benefits, it seems that men don’t choose to enter that field.”
Drawing from her experience in her former position as child development center director, Hall said that it is wrong to generalize male early childhood educators just because of individual men who have committed pedophilic acts while employed in the field, who she called “the outliers”.
“We just saw the one guy in San Francisco … This kind of stuff happens,” she said. “Is that okay? No, but it’s one guy. I refuse to hold the entire industry and every man who wants to work with young children hostage to that one person, just because he’s bad. … He’s bad to the bone, but he does not represent the men that I know who work in early childhood education.”

Going to fall 2021
Porter said a new male teacher will be working with them at the Loma Chica, and that they are “excited” to see more male students in the program.
Santos also shared a free digital children’s book, which the Cañada College Educators Now Club have materialized, on the subject of the COVID-19 precautions and practices. The book also comes with a free workbook, and both materials will soon be available in print.

SMCCCD’s three colleges will be launching a “student apprenticeship program” this fall. The project will allow students to complete their ECE coursework, study for a degree for transfer for free, and gain paid work experience.
“Students will have general education and ECE classes, that degree for transfer, and (the program) will help place them in paid employment if they don’t already have it,” Watts said.
Watts also disclosed that the district’s Emergency Operations Committee (EOC) have given the green light for Loma Chica of Skyline College and the Mary Meta Lazarus Child Development Center of the College of San Mateo to be operational again for the fall 2021 semester, while still adhering to the safety protocols to mitigate and avoid the spread of COVID-19.
“Deep gratitude to the two faculty coordinators at the Centers,” Hall said, referring to Watts and Maggie Barrientos, the child development center coordinators for Skyline College and College of San Mateo respectively. “They have worked really closely with the district, with the parents in their programs, and with the county-wide emergency response system to make sure that our centers are safe, that children will be safe, and that the faculty and staff will be safe.”
With the opening of the child development centers, Brower believes that “most parents are going to have a new appreciation for their teachers and all that they do.”