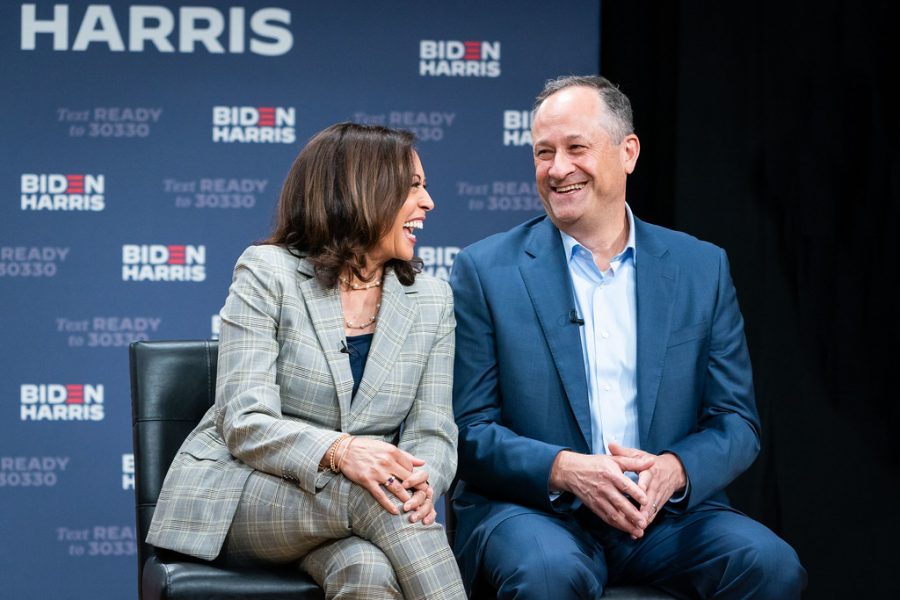 Image via Biden for President/Creative Commons

Douglas Emhoff was used to being involved in high-pressure situations. As a lawyer based in Los Angeles, he had experience defending high-profile clients from the entertainment and financial organizations. It wasn’t a stretch to consider him a steady force, with a solid regime and routine working well in his favor.

But conquering the anxiety a blind date brings was a different story.

It was 2013 and the 49-year-old Emhoff was around five years removed from a rather cordial divorce from his wife of nearly 16 years, Kerstin. The marriage resulted in two children that they were immensely proud of: Cole was a first-year student at Colorado College studying psychology and Ella found herself tinkering around with the fashion industry as a preteen.

Aside from the presence of food and possibly a few beverages, it wasn’t a normal blind date. Emhoff was meeting up with California’s Attorney General and one of the Democratic Party’s top prospects.

Her name was Kamala Harris.

Emhoff recognized the name and knew of her growing resume. He knew she was the first woman, African American, and South Asian American to serve as attorney general in California’s history. He recognized her name, but Harris didn’t recognize his. The point of blind dates is for single individuals to connect without meeting or seeing each other beforehand. However, Harris tossed that thought out the window.

Shortly after their first encounter, the relationship slammed on the gas and took off for the highway. They were soon engaged in 2014, not even a year after their first date. Harris, who never had children of her own, was quickly embraced by Emhoff’s two children, and was given the nickname “Momola”.

When Harris ran a successful US Senate campaign in 2016, Emhoff was right at her side throughout the twists and turns of the campaign trail, while also balancing his job as managing director of a law firm on the West Coast. After Harris was sworn into office, Emhoff accepted a job working at a firm in Washington D.C.

While Harris’ political career blossomed, and travel was becoming necessary more often, her husband’s adaptability trends were put on full display. It was a gesture of commitment when Emhoff withdrew from his law career upon Harris being selected as the 2020 presidential candidate Joe Biden’s running mate. When Biden and Harris clinched the White House victory, the new vice president wasn’t the only individual breaking mammoth barriers.

Doug Emhoff became the first-ever second gentleman of the United States and the first Jewish spouse of a vice president. Although his accomplishment was rightfully fine-print compared to his wife’s, Emhoff has a unique plan for his new role — a role that no other man had held before: He wants to focus on equal access to representation and justice. Thus, his USC law degree and the sector Emhoff knows so well, remain relevant.

As Biden’s wife, Jill, continues her career as a community college instructor, Emhoff is also planning on making a mark on education. Georgetown University will include him as a member of their faculty in their Technology Law and Policy institute.

Sorry for the late alert.
Old Bridge, I received this from a heartbroken parent, spouse, and community member. I was asked to share ASAP. 🙏🏻PLEASE be respectful. I did alter the pronouns to protect identity. Be good to one another and God Bless Us. pic.twitter.com/Hvc2mV4zxz

Growing up in Old Bridge Township, New Jersey, the path to the White House was one Doug Emhoff never could have anticipated he’d ever go down. Although it was unexpected for him to be holding a Bible while his wife was sworn in as the vice president, his community in which he grew up was filled with immense pride.

“From our perspective, we were very proud,” said David Cittadino, Old Bridge Township’s superintendent of schools. “This is something that will always be part of history for Mr. Emhoff and Kamala Harris.”

He’s just along for the ride, one that is historic and significant in its own way.

Virtually overnight, I went from being a lawyer to being a member of a team fighting for justice and trying to turn the page on a dark chapter in our nation’s history.

Tomorrow, the next chapter begins. https://t.co/8a3nI9DFEF