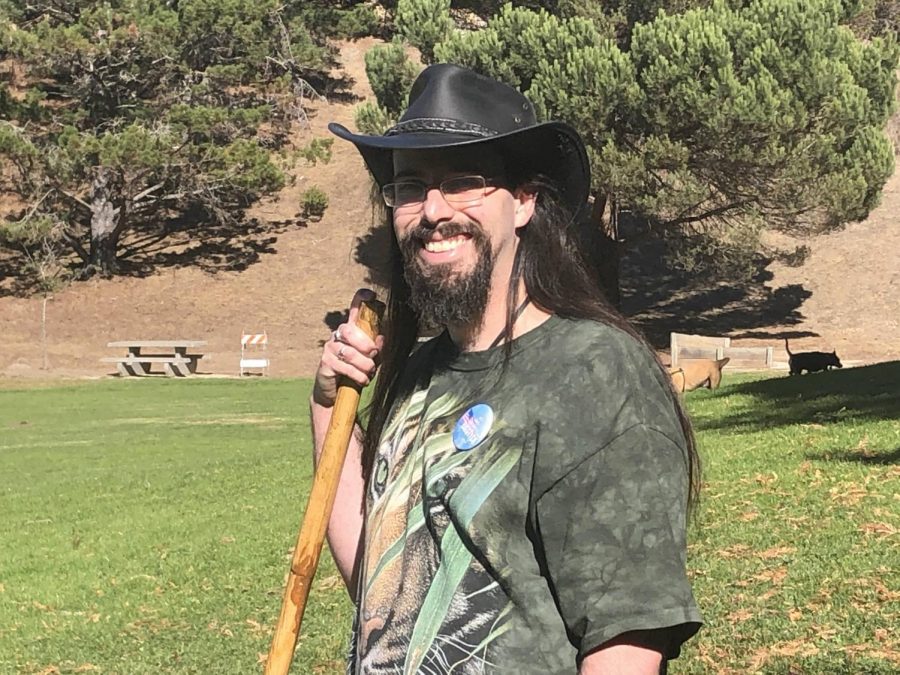 Tygarjas Bigstyck has lived in Pacifica his entire life and is now seeking a run for one of five city council seats.

In the fall of 2017, Tygarjas Twyrls Bigstyck was exasperated as he listened closely to a city council meeting that was taking place in his lifelong home of Pacifica, California.

As the beach town’s sun was setting, the personnel seated on the council had attempted to plow through and force rent control on citizens through Measure C, a proposition that would affect nearly 2,300 rental units in the city. As a member of the rent advisory task force, Bigstyck was an instrumental voice in the effort to find a common ground to help solve the lingering issue.

There was one problem: He felt that his opinion on the subject was blatantly ignored and swapped out for a solution that wasn’t in the best interest of the community as a whole. Most of all, he was nauseated by both sides of the argument loudly disagreeing. He resembles it as a “civil war” conversation.

“The way they tried to put Measure C through, to my mind, was as extraordinarily faulty a process as any I could have hoped to see in my lifetime,” Bigstyck said.

This was far from the first time he had spoken out about pressing issues regarding Pacifica. He’s been a regular when it comes to sharing his opinions and views at these city council meetings for six years. He’s been around the meetings so often that he was appointed as planning commissioner, in addition to all his previous service on the board at the Resource Center.

“What that tells me is that — at least until a point — the representatives in this city see me more than just a crackpot that shows up,” Bigstyck said.

As time went on, he became more familiar with the way the city is run, and learned more about the history of it than he could’ve ever imagined.

“We’re a community on the coast that has spent a lot of time being unfound, and, generally speaking, when you have a coastal community, it becomes an attraction for tourism — Pacifica has started to do that a little bit,” Bigstyck said.

Many Pacificans can recognize Bigstyck just by his creative name. Others could identify his long, brown hair, bushy goatee, and regular appearance in either a fedora or cowboy hat. Now that the COVID-19 pandemic is in play, a tiger-themed mask is a new addition to his wardrobe. It’s not too difficult to locate him; he’s been the front-end manager at the Linda Mar Safeway for over a decade.

Unlike Cohen, who has lived in the city for a total of six total years, Bigstyck has lived in Pacifica all of his life. His parents separated when he was just 4 years old, and even then his father lived a few minutes away in the neighboring town of San Bruno.

“It was hard shuttling back and forth, because during the week I was doing schoolwork — and that was my life in Pacifica — and the weekends I was at Dad’s, Bigstyck said. “In either instance, it didn’t really lend itself to being involved with people or community.”

Once, as an awkward preteen, he switched the narrative by creating a new club at his middle school: The Society of Weirdos. It was his way of coping with his uniqueness and inability to fit in with the other students. He created business cards and formed cabinet positions for members of the club.

“The only qualification to get into the club was feeling outcast, ostracised, or like you don’t belong,” said Tygarjas’ mother Deborah Goldfarb. “He organized this club so all these kids will feel accepted.”

After graduating from Terra Nova High School, Bigstyck traveled nearly 2,300 miles southeast to Tulane University in New Orleans. It was as a Tulane Pelican that he began to emerge from his sealed shell, and earned degrees in English, with an emphasis in creative writing, and religious studies.

Inspired by the likes of Grateful Dead member Robert Hunter’s passion, President Bill Clinton’s speaking ability, the Dalai Lama’s wisdom, and Sam Phillips’ songwriting, Bigstyck has consistently been one step ahead of everyone else when it came to studying the human experience closely. He’s even authored two novels, Passenger: A Divinely Inspired Comedy in 13 Books (2010) and Chronicles of the Angels: Volume One, Part One (2019).

“It’s really, truly remarkable,” Goldfarb said. “When he was a little kid, he was saying the most profound things. He’s just a really deep soul, and he knows that his life here is temporary and wants to make the most out of it — Making the most out if it is being kind, helpful, and useful.”

Now, as an aspiring elected politician in his hometown, Tygarjas Bigstyck has a wide variety of plans incorporated into his agenda. One of his main focuses is finishing projects that Pacifica has already started, like transitioning a faulty retaining wall — north of Herschell Harkins Memorial Pier — to a full-fledged sea wall. He believes one of his main strengths is considering every possible idea before making a decision — a strength that is a rare find in the world of national politics today.

“My approach is always to start looking at the issue from all sides, and see if we can find an approach that works for everybody, rather than, ‘Oh, they’re louder, so let’s do it because of them,’” Bigstyck said.

Aunts, uncles, grandmothers, cousins, and friends have been among the many to donate to Bigstyck’s campaign. As a self-described moderate in this election, he has also scored the endorsements of a handful of officials throughout Pacifica and San Mateo County.

“Tygar shows his passion for our community by attending and participating in every city council meeting,” said Pacifica Council member Mary Bier. “During his time as the Planning Commissioner, his questions have been thorough and thoughtful and his decisions have been fair and informed. He truly holds the best interests of our city in his heart and puts that into action through his civil service.”

Cohen has formed relationships with officials at the state and real estate level, and Davis has gained most of her support from the Pacifica Progressive Association, whereas the money that Tygarjas has raised has come from both sides.

Bigstyck will spend Election Day on Nov. 3 working his day job at Safeway until 8:00 PM. He won’t be focusing on fixing roads or gaining tax revenue. He might not even be thinking about when the results will roll in.

Those thoughts will be overshadowed by the task at hand: making sure Pacificans have what they need to be successful, and making sure they have a positive experience doing so.

“At the end of the day, the reason I am running is because I want to steer the conversation in the direction of people listening to each other, and if they can’t listen to each other, then I want to be there to listen to them so that I can speak in a voice that sounds harmonious between the two sides there are to what I’m hearing,” he said.