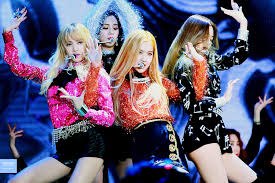 With songs that mix English and Korean, Blackpink, a K-pop girl group, is becoming a huge success in the United States. Touring around North America, releasing a new mini album and playing at Coachella are some of the things this group has been doing.

Jennie Kim, Jisoo, Lisa and Rosé are the four girls that give life to Blackpink. They have been together for a long time now and consider each other family. When they first joined YG, the entertainment company they are part of, they were trainees and had years of training to then debut as Blackpink.

According to another Billboard’s article by Nolan Feeney, “for 12 hours a day, seven days a week, the future members of Blackpink — along with, by Jennie’s estimate, 10-20 other aspiring singers who cycled through the project — studied singing, dancing and rapping, taking part in monthly tests designed to identify their strengths and weed out subpar trainees.”

This was true at Coachella where they performed at both weekends. From all the videos and photos of the event, it is easy to see how happy they were. It was also during the festival that people got to know some famous Blinks (fans of the group).

According to a Billboard article by Jeff Benjamin, there are many famous people that are Blackpink’s fans: Dua Lipa (with whom the girls already have a collaboration, in songs called “Kiss and Make Up”), Ariana Grande, Harry Styles (who went to their concert in Los Angeles), Halsey, Diplo, Pharrell and Jaden Smith. This proves that K-pop has become popular beyond South Korea.

From the group’s Instagram (@blackpinkofficial) it is possible to see they are having huge shows.

The group released its first song, “Boombayah”, in August 2016. But unfortunately they haven’t yet released a full album. Their new song, “Kill This Love”, was released early April 2019 and has been performed in some TV programs like “The Late Late Show with James Corden”. Earlier this year, the girls performed at “The Late Show with Stephen Colbert” with their most recent song at the time, “Ddu-du Ddu-du”.

Their recent music video release was a big success.

When “Kill This Love” was released on April 4, it had the biggest music video debut with 56.7 million views in its first 24 hours in YouTube history until Taylor Swift broke the record with her release of “Me!” on April 26.

Additionally, Blackpink was the first Korean girl group to ever perform at Coachella. They have worked hard and they keep on doing it. They are seeing and experiencing some good things due to all this hard work. I recommend that you check out some of their music videos and listen to their songs!