“When We First Met”: Accepting reality as it is 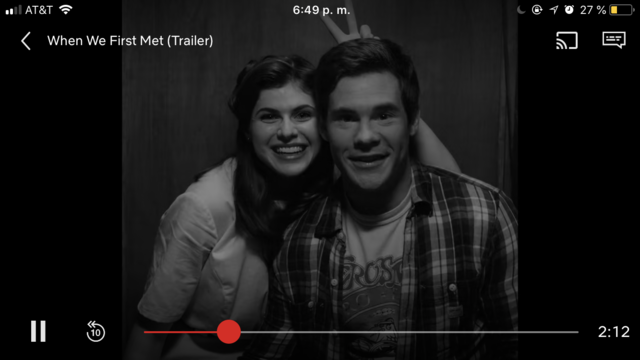 The Netflix romantic comedy, “When We First Met” brings sweetness and laughter, but also hopeful, yet heartbreaking reality and life advice.

“When We First Met”, is about a young adult who finds a way into the past and uses it to try to avoid being friend zoned.

This film really brings to life the romantic struggle of Noah Ashby, played by Adam DeVine, who has fallen in love with the girl of his dreams at a Halloween party. This girl ends up being one of his best friends, but three years later she becomes engaged to someone else.

Noah believes that they are meant to have a life together, so this is his worst nightmare. Avery Martin, the girl of his dreams, played by Alexandra Daddario, will marry someone else without knowing how he feels. Yet, the morning after the engagement party, he finds himself in the exact day he met her. Noah is able to travel through time and uses it to go back as many times as he can possibly go, just to get it right: to “fix” everything and to get her to be his.

He does things differently every time and wakes up living with the consequences of his actions. The first few tries he does drastic changes and the consequences he faces are not the ones he wants. Yet, as he keeps trying, and even when he gets the results he hopes for all along, he isn’t satisfied. As one goes through life, one will realize that is not always about what we want, but what we need.

The film gives life advice to everyone who watches it. Even if one could go back in time and change things, even just a tiny bit, would it be worth risking the future that you already have? Changing things in the past could even change who you are as a person, and for the better or worst, you wouldn’t be the only one whose life would have changed. The people around you might not be the same or may not even be in the future that you hoped to have.

This film is a mind and eye opener. It really makes you realize that maybe you have just been blind to the possibilities and opportunities that life has presented to you over the years. Or maybe not. Maybe it’s not the fact that you’ve been blind to possibilities, but that you have been looking in the wrong places for them.

According to the film, things happen and we may not have much power to change that, but we can change the way we react and how we approach life.

This is a movie that will give audiences hope about their futures and help them keep an open mind about what is to come.