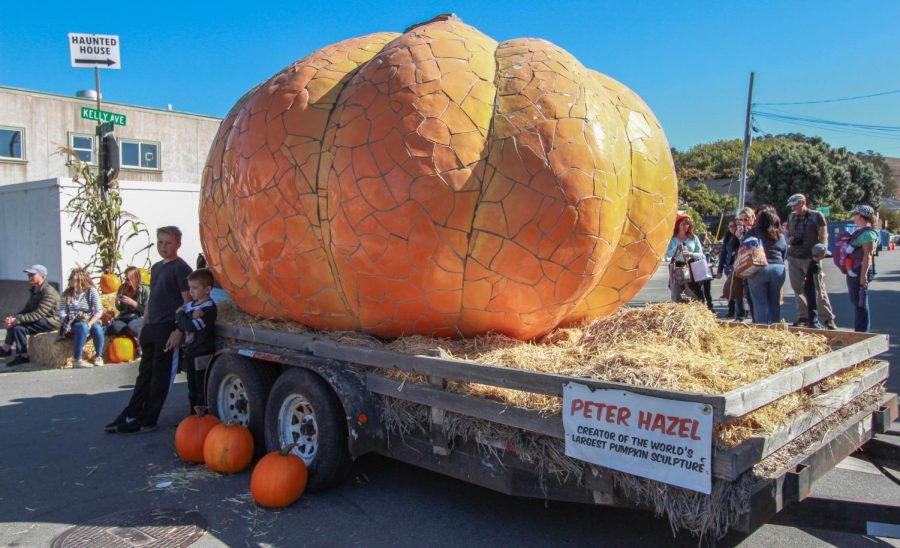 For some, autumn hasn’t arrived until Starbucks has ushered in their infamous pumpkin spice latte; but for many Bay Area residents, the Half Moon Bay Art and Pumpkin Festival is sign of the changing seasons.

Home to over 12,000 residents according to U.S. Census Bureau, the coastal town’s annual festival elicits a homey, small town feel with the Great Pumpkin Parade taking place along Main Street Half Moon Bay which accommodates an eclectic mix of restaurants, cafes, and shops. It wouldn’t be far-fetched to imagine Rory and Lorelai Gilmore attending a similar event in Stars Hollow. For such a small town, it would be easy to forget that Half Moon Bay is considered the World Pumpkin Capital.

If someone were to buy pumpkin wine or beer from one of the Half Moon Bay Arts and Pumpkin Festival tents, for a few more dollars, they can also purchase wine glasses or beer steins with the event’s insignia. However, if a beer is bought from a private establishment and not one of the Pumpkin Festival tents, beware that you may wind up in “beer jail” since you’re not allowed to take alcoholic beverages off the premises. Fortunately, this allows for a great opportunity to people watch.

Festival-goers can be seen walking around in Halloween costumes, pumpkin festival gear and pumpkin hats. The event has been around for 47 years and for many, becomes a family tradition. The event is very supportive of local artists, local high school and local sports teams by featuring rows upon rows of tents of homemade wares, showing off Half Moon Bay High school Homecoming royalty, trucks of young t-ball players and a haunted house that features the Young Actor’s Workshop.

Tanja Fischer, a Half Moon Bay resident, says the support of local groups as her favorite part.

“I love going to the parade and watching the school kids, the (high school) band, the volunteer firemen, and the baile folklorico,” Fischer said.

She also likes to support local store owners by spending the festival in different shops on Main Street.

The event is definitely kid-friendly featuring a face painting station, a 24’ rock climbing wall, and a costume contest. The pumpkin festival has four stages for musicians, an expert pumpkin carver, Farmer Mike, and the massive gourd winner of the Safeway World Championship Pumpkin Weigh-Off. The event is so popular that it sees people come from all over.

Sacramento resident William Springer is in his third year of attending the Pumpkin Festival. He looks forward to the bands, especially The California Cowboys since he likes country. According to Springer, his go to food is a classic pairing during the holidays-

“Pumpkin pie and whipped cream and a hot cup of coffee,” Springer stated.

Spending time with people celebrating one of the things that makes Half Moon Bay great isn’t a bad way to spend a weekend.

For Kimberling, she says the pumpkin festival is one way she can “fill (her) bucket” and recharge when her job takes an emotional toll on her. “It’s also the only time you’ll find a gourd on my head,” she joked.