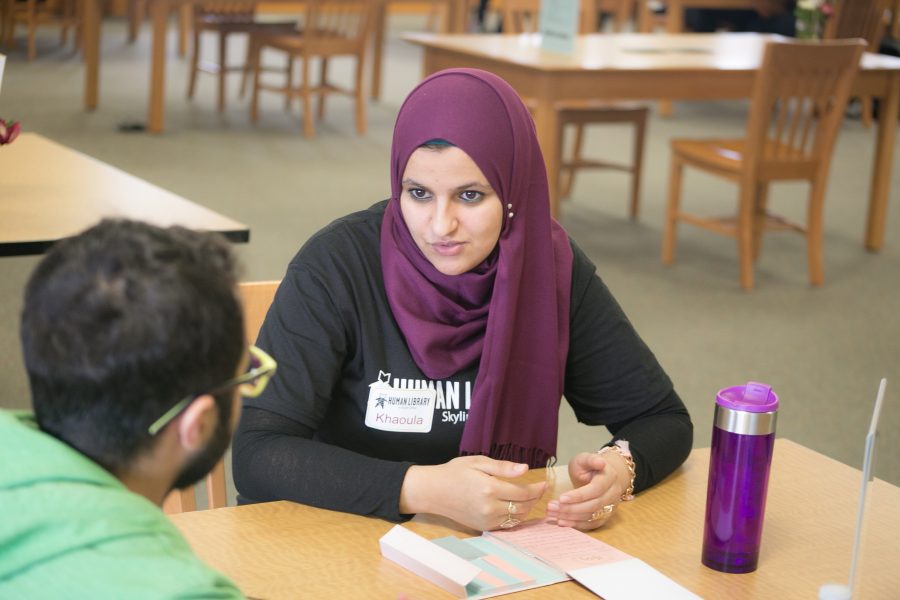 Khaoula Aissaoui and a student talking at one of the tables available at the Human Library event.

What you wouldn’t expect from having several different conversations with different people, is to run-over the same buzz words again and again when talking about different subjects.

Since its inception, more than 200 “Human Library” events have taken place all over the world in cities like Egypt, London, Paris and Tunisia. The purpose of the “Human Library” is not only to broaden people’s horizons but to challenge any prejudices people may have.

Although Skyline applied to host the event last August, the application didn’t get approved until March. Due to Trump’s election in November, the Human Library Organization had been inundated with plenty of applications to host events which overwhelmed the organization. In March, 30 “Human Libraries” were held in the U.S. alone.

The event allows people to act as “books” and have others check them out for a certain amount of time. Then the lenders have the opportunity to make the rounds, talking to as many people as they wish.

Mary Torres Volken, a librarian at Skyline, helped organize the event. She was particularly pleased with what you can learn when you’re in a safe space and able to be completely transparent.

“When you’re working with someone, it’s really not appropriate to ask certain questions about [their] background without being intrusive,” Volken said. “I spoke with someone who talked to me about how you can manage to get through a night class.”

The first “book” I got to check out was Khaoula Aissaoui. Aissaoui is a Skyline student who hails from Algeria. Her mission in learning English and coming to America was to educate people about Muslim culture.

“The media has wrong information… If my religion is what they say on the news, then yes, I can accept that but it’s not that so it’s painful for me,” Aissaoui said. “Not just me but for all the Muslim community.”

She also wanted to see what was reflected in the other side of the mirror.

“Since I got [to] a certain level in English, I was excited to talk to someone non-Muslim to see what he or she thinks about me as a girl or as a human or as a Muslim girl,” Aissaoui said. “They give me the motivation to explain what’s my religion, the good things inside me, and why I am wearing a hijab.”

My second “book” was Mustafa Popal. Popal was a refugee from Afghanistan and is now a Social Science and Creative Arts professor at Skyline.

The struggle with identity is real and it is one that he knows personally. Therefore, he’s an expert at teaching his students and uses his struggle as a vehicle to explain the human experience.

“I teach these topics but no matter what subject I teach, the focus is always identity,” Popal said. “How we can teach this particular… class to explain identity, the development of identity, on one level and then about the human experience on another level.”

My third “book” was Jim Houpis. Houpis is the Dean of Academic Support and Technologies at Skyline. Although he does specialize in library technologies, his background is working in the sciences and for the EPA for more than 30 years.

“Stop teaching it the way we’re teaching it,” Houpis said about how he gets his students to become interested in science. “We teach too much content.”

Pearl Ly, Director of Learning Commons, helped out with some coordination and assisted with finding the “books.” But planning did not come without its challenges.

“I really tried to find someone who was undocumented but it didn’t work out,” Ly said.

The event was a success and Skyline has bigger and better plans for next year, as well as a different theme.

“It really was a team effort… Pearl wrote the grant and got the funding for it,” Volken said. “Ryan did the graphics, Mitchell ordered the food and I was coordinating [the] training.”

“We’re hoping that we can do it every year because it was very, very worthwhile,” Volken said. “For both our readers and our books.”